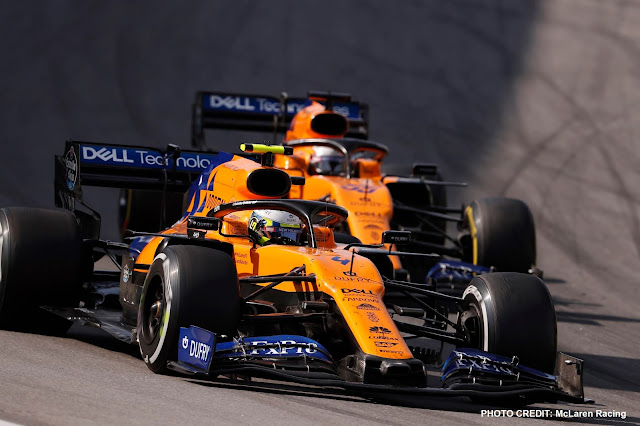 Yas Marina circuit is the central focus of Abu Dhabi’s man-made Yas Island, which also features seven hotels, a golf course and a concert arena. Construction of the 5.554km/3.451-mile anti-clockwise track began in 2007 and it hosted the first Abu Dhabi Grand Prix in November 2009.

The track has several unique features, including air-conditioned pit garages, a pit-lane exit that passes underneath Turn One and grandstands that overhang the run-off area at Turn Seven. Even the timing of the race is special because it’s the only twilight race of the season, getting underway at 1710hrs local time, 30 minutes before sunset. The 55-lap race ends after dark, under the glare of the world’s largest permanent lighting system.


Carlos Sainz
“After an incredible race and result in Brazil, it was amazing to take the trophy back to the factory and share the achievement with the whole team. I’m aiming to end the season on a high and there is still a lot to fight for in the last race. I’m fighting to finish sixth in the Drivers’ Championship and, even though it’s not going to be easy, we have prepared thoroughly for the weekend and I have confidence we can have a good race.

“Abu Dhabi is a fantastic venue and the perfect place to celebrate the close of the season. Starting the race in the evening and finishing it under the floodlights is always an interesting challenge. Although our P4 in the Constructors’ Championship is secured, I hope we can score some good points with both cars to round out a positive season.”


Lando Norris
“My first year in Formula 1 has been an amazing experience and I feel that I’ve gained a lot of experience since lights out in Melbourne. I’m pleased to be finishing the season at a circuit I know well, having scored a podium here in F2 last year, as well as completing the 2018 post-season test. It’s an interesting circuit with a few unique features that keep the racing interesting. I’m looking forward to another exciting weekend and to giving it my all one last time this year.”


Andreas Seidl - Team Principal
“After the great result at Interlagos, it’s time to go racing again. We took time last week to celebrate Carlos’ podium and our confirmed P4 in the Constructors’ with the whole team back at the factory. But now, we have our heads down again and are focused on the task at hand. We know that we need to keep pushing at every opportunity if we want to earn more podiums, and the Brazilian Grand Prix provided all the motivation we need to achieve this goal.

“We now turn all our attention to the final race of the season, where we will aim to end the year on a high. We’ve made good progress over the season and we want to carry that into the final race. With our Constructors’ position confirmed, we are now targeting the best possible positions in the Drivers’ Championship. Carlos is well placed to fight for sixth and Lando can also climb positions this weekend. Our passion and motivation remain strong and we’re looking forward to fighting until the very last lap of the season.”

PREVIEW PROVIDED BY - McLaren Racing.
Posted by Junaid Samodien at 15:33