Formula 1 to return to SA with F1 Fan Festival in March. 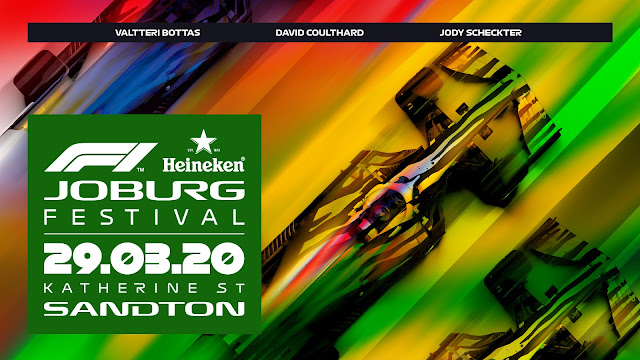 Formula 1®, together with Heineken® have announced the sport’s return to South Africa with an immersive fan festival.  On 29 March 2020 the Heineken® F1 Joburg Festival, in partnership with Gauteng Province, will treat Johannesburg residents to a thrilling fan event, and live car run featuring three F1 teams.

The Festival will give fans the opportunity to see 2019 Formula 1 World Championship runner-up Valtteri Bottas and F1 legend David Coulthard tear through the streets of Sandton as they bring the Grand Prix atmosphere to the heart of the city.

"We are excited to announce that F1 will be heading to South Africa this season, with the Heineken® F1 Joburg festival. South Africa has a very special place in Formula 1 history and we remain committed to returning to South Africa in the future," said Ellie Norman, Director of Marketing and Communications. "The festival will be an incredible opportunity for the people of Johannesburg to see F1 up close and personal, with live car runs, fan experiences and incredibile live music acts."

The amazing exhibition will be a must-see for Gauteng and all African F1 fans, who will be immersed into the world of F1, as the Mercedes-AMG Petronas Formula One Team, Aston Martin Red Bull Racing and Renault F1 teams roar above the reef at Africa’s first-ever F1 festival.  The day will be packed with fun-filled activities catering for all; including a fan zone featuring interactive activations such as the ‘DHL esports Challenge’ and the ‘Pirelli Pit-Stop’ Challenge along with spectacular car displays including supercars, SA Karting, F1600 and historic single-seaters.

"I’m delighted that Formula 1 and SAGP have come together to bring an F1 Festival to South Africa for the first time and I am very excited to be involved in what promises to be an amazing spectacle on the streets of Joburg, South Africa has a long history with F1 and the Festival will provide a chance for fans to get up, close and personal with the sport," Scheckter said.

The Heineken® F1 Joburg Festival will be broadcast live on SuperSport and will feature live track activity starting at 1:30pm with the main F1 Live car run commencing at 3:30pm. From 5pm, Festival-goers will be treated to live music, with the festival closing at 8pm.

Tickets are available from Computicket from just R60 for a general admission ticket and can be purchased here: heinekenf1joburgfestival.computicket.com

*NB - grandstand tickets will be made available at a later date.
Posted by Junaid Samodien at 14:34 No comments:

SuperSport has confirmed that it will broadcast the record 22-race Formula 1 season in 2020. The F1 coverage will include SkySports F1 feeds and additional supplementary programming as per the 2018 and 2019 seasons.

In 2017, the South African pay-tv broadcaster announced a long-term deal with SkySports, which included the broadcasting of the race build-up and post-race shows, as well as Ted’s Notebook, and other supplementary programming.

However, it remains unclear if SuperSport instead to broadcast any of the SkySports F1's supplementary programming live [Press Conferences, F1 Show, Paddock Live, etc].

In addition to the confirmation that F1 will remain on SuperSport, the broadcaster has also confirmed other motorsport championships that will be broadcast in 2020:

The list provided does not include the Verizon IndyCar Series, and it remains unclear if SuperSport will broadcast the series in 2020.
Posted by Junaid Samodien at 14:01 No comments:

Kevin Abbring will return to supercars competition in the 2020 European Rallycross season with GC Kompetition, driving a Clio R.S. RX.

The 31-year-old's motorsport career started off in rallycross in the Dutch Ford RST series, where he went on to win the 2005 and 2006 championships before moving to the Dutch Rally Championship in 2007. He impressed with class wins in both the WRC and IRC and made his top line WRC debut with Hyundai in 2015, scoring points and winning stages at the highest level of rallying.

After a decade in rallying, Abbring returned to rallycross making his World RX debut in Hell, Norway, with ES Motorsport where his debut appearance in dreadful conditions was nothing short of exceptional. He claimed a fourth-place finish in Norway and repeated that feat at the Swedish track in Höljes.

The Dutchman will compete in his first full-time RX championship, and he is keen to get his first taste of the car.

"I’m very pleased to work with GCK, and engineering company FORS, from 2020 onwards! GCK is not only the team with arguably the biggest potential, it’s also a team with extremely experienced and motivated people, with whom I worked closely in the past," said Abbring.

"The team has invested a lot in the car and our main focus now is to bring those pieces together and find the optimum balance. I can’t wait to get our test programme going and get a first taste of the car."

GCK has always been a team to push for sustainable motorsport developments and that is something that Kevin is equally passionate about.

"Guerlain and GCK have been leaders in the drive to find sustainable and environmentally friendly solutions in rallycross, as well as other motorsports. For me, it is a great opportunity to work on a sustainable future with a team that has a strong focus on future motorsport developments," he adds.

"It also offers me the opportunity to fight for a championship again and that’s my key focus! I have a lot of respect for Guerlain and the team and I am proud to be part of GCK."

Guerlain Chicherit, the team owner of GC Kompetition, is excited that Kevin Abbring will join his team for the 2020 European RX championship. "I’m super stoked to have Kevin represent GCK in European Rallycross," he said. "Kevin has enormous talent and is super committed to the sport. I look forward to working closely with him and supporting him through our pre-season testing and the season to push for the Championship title."

GCK has also made several changes and developments behind the scenes over the off-season, including the appointment of Paul Bourion as General Manager. Bourion has more than 25 years’ experience in the motorsport industry.

Meanwhile, FORS have also reinforced their support to GCK through the recruitment of a new engineer, Sébastien Lessoneur who worked as Technical Director for Hyundai Motorsport, EKS Audi and ES Motorsport more recently on their rallycross programme.