Safety in Formula 1 or any form of motorsport is of paramount importance, and therefore my next blog will focus on ‘Cockpit Safety’. As per my previous blog about Safety in Formula 1 ‘HANS device’ this blog will now focus on the actual safety within an F1 cockpit. At the centre of the modern Formula 1 car is the 'monocoque' which incorporates the driver's survival cell and cockpit, and also forms the principal component of the car's chassis, with engine and front suspension mounted directly to it. Its roles as structural component and safety device both require it to be as strong as possible. According to Formula 1.com, “Like the rest of the car, most of the monocoque is constructed from carbon fibre - up to 60 layers of it in places - with high-density woven laminate panels covering a strong, light honeycomb structure inside.”

The survival cell is surrounded by crash-protection structures which absorb energy in the event of an accident and features a roll-over hoop behind the driver’s head, made of metal or composite materials. The survival cell’s sides are protected by a 6mm layer of carbon and Zylon, a material used to make bullet-proof vests, to prevent objects such as carbon fibre splinters entering the cockpit. For safety reasons, no fuel, oil or water lines may pass through the cockpit and/or survival cell and the driver must be able to get out within five seconds without having to remove anything except seatbelts and steering wheel (which he must be able to refit within another five seconds).

According to FIA regulations, “The width of the cockpit must be 50 centimetres at the steering wheel and 30 centimetres at the pedals. The temperature inside the cockpit averages 50 degrees Celsius. The dimensions of the cockpit opening have grown over the years. Currently it must be 850mm long, at least 350mm wide at the pedals and 450mm wide at the steering wheel, with the rear half wider still at 520mm. The rear 375mm of the cockpit’s side walls must rise upwards at an angle of at least 16 degrees (to reduce the risk of injury in the event of one car flying over the top of another) and the edge of the cockpit must be enclosed in an energy-absorbing material with a thickness of at least 100mm.”

Did you know … that during his high-speed crash at the Canadian Grand Prix in 2007, Robert Kubica was subjected to more than 28 times the acceleration of gravity? This meant that his body effectively weighed two tons instead of 73 kilograms. Millions of spectators expected the worst, but thanks to the strict safety precautions in Formula One racing Kubica suffered only minor bruises.

Cockpit Safety has improved hugely over the years, and thanks to these vast improvements Formula 1 has now become a much safer form of motorsport. Let’s now take a look at the driver’s seat and the compulsory equipment required within the cockpit of a modern Formula 1 racing car. The driver’s seat is a single plastic cast, tailored to provide optimal support. The 1999 rules have stipulated that the drivers’ seat may not be installed as a fixed part of the car. Instead it must be possible to remove the driver and seat as one after an accident, thus reducing the risk of spinal damage.

All Formula 1 cars are now required to be equipped with a fire extinguisher system. This automatically spreads foam around the chassis and engine area in the event of fire and can also be operated manually by either the driver or marshals.

According to Formula 1, “An accident data recorder is also compulsory. Linked to a medical warning system, it registers important information such as speed and deceleration to tell medics how severe the impact was. In addition, there is a cockpit display with red, blue and yellow lights which informs the driver about any warning flags being waved around the circuit.” An example of this would be the huge (25G) impact Fernando Alonso faced when he had hit a kerb in the 2013 Abu Dhabi Grand Prix, in where the medical warning system was triggered and Alonso was then required to report to the medical centre.

These safety mechanisms were all put in place in order to ensure that the Formula 1 drivers are safe in all situations. I hope you have enjoyed this blog! Feel free to leave a comment.

Safety in Formula 1 or any form of motorsport for that matter is important and this week’s blog will take a look at the HANS device – the Head and Neck Support system. The HANS device is a safety mechanism made compulsory in many forms of motorsport. The device prevents the probability of head and/or neck injuries in an event of a crash. A major cause of death amongst drivers during races were through violent head movements, where the body remains in place as a result of the seat belts but the momentum keeps the head moving forwards, causing a Basilar skull fracture resulting in serious injury or immediate death.
Notable race car drivers who died from Basilar skull fractures include:
·         Formula 1 drivers: Roland Ratzenberger and Ayrton Senna in the 1994 San Marino Formula 1 Grand Prix.
·         Indy 500 drivers: Scott Brayton, Bill Vukovich and Tony Bettenhausen.
·         NASCAR drivers: Adam Petty, Tony Roper, Kenny Irwin, Jr., Terry Schoonover, Grant Adcox, Neil Bonnett, John Nemechek, Dale Earnhardt, J. D. McDuffie and Clifford Allison.
According to Formula1.com, “The original HANS device went on sale in 1990, but its large collar was unsuited to single-seater series with narrow, tight cockpits. However, after Mika Hakkinen's massive accident in Adelaide, Australia in 1995 (in which he fractured his skull) the FIA instituted research to establish the best way of protecting Formula 1 drivers' heads in major impacts. Airbag and 'active' safety systems were briefly considered, before the focus shifted to development of a HANS system suitable for F1 racing.”

Did you know …that in tests HANS was shown to reduce typical head motion in an accident by 44 percent, the force applied to the neck by 86 percent and the acceleration applied to the head by 68 percent - bringing the figures for even large impacts under the 'injury threshold'?

Formula 1 mandated the HANS device in 2003 after extensive testing and sharing the results with the FIA, the Head and Neck Support (HANS) system consists of a carbon fibre shoulder collar (U-shape) which is secured under the driver’s safety belts and connected to his helmet by two elastic straps. In the event of an accident, HANS is intended to prevent stretching of the vertebrae and to prevent the driver’s head from hitting the steering wheel. The FIA has made HANS device compulsory for all International-level events from the beginning of 2009.

I hope you enjoyed the read! Please feel free to leave a comment.
(Source: Formula1.com)
Posted by Junaid Samodien at 14:37 No comments: 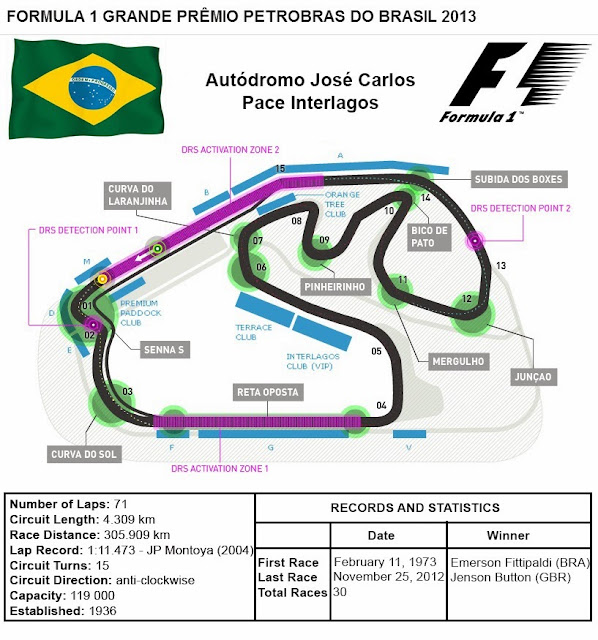 Posted by Junaid Samodien at 23:01 No comments:

Records and Statistics of the 2013 United States Grand Prix 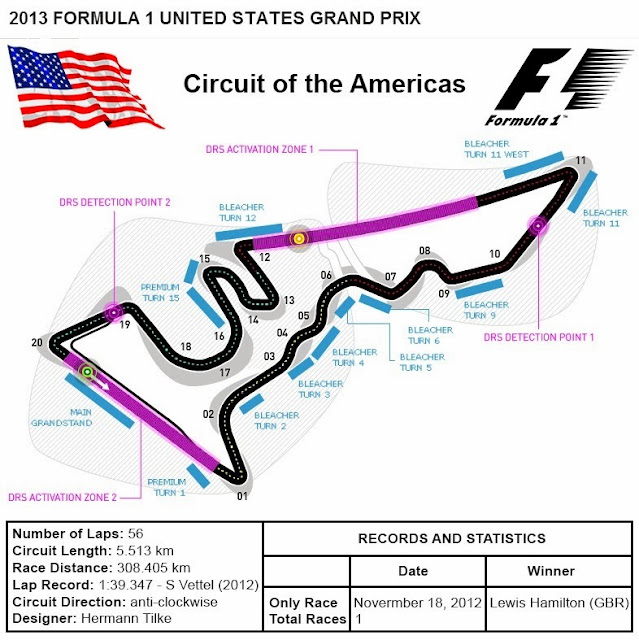 Posted by Junaid Samodien at 22:56 No comments: 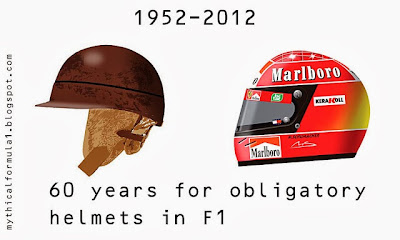 Safety in Formula 1 or any form of motorsport is very important, and therefore my next blog will be based on ‘Helmets’. As per my previous blog about Safety in Formula 1 ‘Clothing’ this blog will now focus on the crash/racing helmet. I most certainly believe that the racing/crash helmets also play a pivotal role in the safety of racing. Crash helmets have been made compulsory in Formula 1 racing since 1953, but like F1 the cars, their design and construction have evolved enormously since the beginning of this form of motorsport. For racing drivers, head and neck trauma remains the greatest single injury risk in any form of motorsport, hence the introduction of helmets and the Head and Neck Support (HANS) system.

According to Formula1.com, “…modern F1 helmets must be supremely light - around 1250 grams is the norm - and strong. The lighter the helmet, the less weight it adds to the driver’s head under the extreme G-forces experienced in accelerating/braking/cornering, hence the smaller the risk of whiplash-type injuries. And the stronger the helmet, the greater its ability to absorb impacts and resist penetration during a crash.”

The visor is constructed from a special clear polycarbonate, combining impact protection with flame resistance and exceptional visibility. According to Formula1.com, “Most drivers use tinted visors, the insides of which are coated with anti-fogging chemicals to prevent them misting up, particularly in wet conditions.” Several transparent tear-off strips are attached to the outside of the visor, which drivers may tear off if need be to clear there line of vision or dirt that may accumulate during the race.

Did you know…that despite the cutting edge materials used in their construction, Formula One helmet liveries are still painted by hand? It’s an incredibly skilled job requiring hundreds of hours of work for more complicated patterns and designs.

In order to ensure that the Helmets meet the strict safety standards required the Formula 1 helmets are subjected to extreme deformation and fragmentation tests. According to Formula1.com, “To pass the tests the helmet is made principally of carbon fibre, polyethylene and fire-resistant aramide, and is constructed in several layers.”
In 2011, helmets began to develop with the feature of new Zylon strip across the top of the visor to enhance protection significantly. This safety precaution become relevant when a spring fell of Rubens Barrichello’s (Brawn GP car) and struck Felipe Massa through the visor.  According to Formula 1.com, “The strip, which is 50mm tall across the full width of the visor, overlaps the top 25mm of the visor itself and extends 25mm above the helmet shell edge. The strip adds about 70 grammes to the helmet, but doubles the impact performance of the visor.”

Last but not least the F1 helmets undergo wind-tunnel testing to help achieve a design that minimises the drag produced when the driver is travelling at speed. I hope that you have enjoyed the read!


Posted by Junaid Samodien at 18:30 No comments: