Caption: Louis Lima launching his machine in 2002 with a time of 8.6 seconds.
Source: limapiping.co.za

In South Africa, Drag racing is an established sport, with a number of strips around the country including: Tarlton International Raceway, ODI Raceway and Killarney Racetrack to name a few. Drag racing is controlled by Motorsport South Africa (MSA) and all drivers are required to hold a valid Motorsport South Africa license. Drivers can compete in a number of categories including Top Eliminator, Senior Eliminator, Super Competition Eliminator, Competition Eliminator, Pro Street Bikes, Superbike Eliminator, Supersport Shootout (motorcycle), Street Modified, and Factory Stock. These events are hosted on a regular basis and a schedule can be found on their website: www.wpmc.co.za 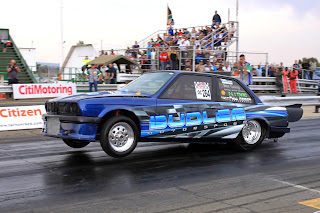 Caption: The fastest BMW of its kind on this planet!
Source bimmerboost.com

The sad thing is that in South Africa, we do not have a set drag racing series for Top-fuel drag racing cars or funny cars, but at many national events, you would be able to see these machines, and impressive enough some of South African drag racers have world records, namely: Butler Motorsport with a record time of 7.69 seconds and the machine of choice is a BMW E20, which is South Africa’s first 7-second turbo car, followed by Louis Lima with 8.6-seconds in 2002, which has now been broken but his choice of weaponry was a Nissan Champ 1400 bakkie, which did some crazy wheelies when launching off this line.

If you like what you reading, grab a copy of Speed and Sound Magazine at any stockist and you can obtain the schedules of South African events and even get up to gate on currently events and upcoming monster machines. Grab it while its hot!

Posted by Junaid Samodien at 11:41