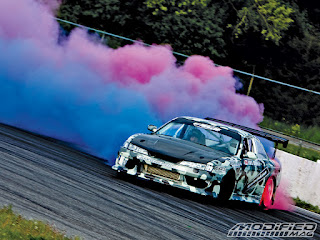 Caption: This is the art of drifting!
Source: rdcramblings.com

Let me begin my series of blogs on motorsport. If you are not sure as to what drifting really is about, you’ll now learn a bit about this awesome sport. Many of professional drifter’s define drifting as taking a corner at high speed while the rear is at an angle to the corner that has been taken. Drifting can be compared to power sliding as the car slides into corners, but the only difference would be that the car is taking the corner at an angle while being controlled by the driver. There is loads of tyre smoke as the car flows through corners, moving from point A to point B.

The most important requirement while drifting is that the driver is required to balance the vehicle as it is essentially out of control and regarding control once the corner has been exited. The most commonly used drift machines (vehicles) in South Africa are: Nissan 200sx, Nissan 350Z, Mazda RX7, BMW E46’s, Nissan R34 and R35 Skylines. These vehicles are seen at all the local events in South Africa. South Africa has a drift king by the name of Otto Graven. Otto Graven hales from Kimberley and owns Monstermob raceway. Apart from his building, Otto owns a Nitros Oxide System (NOS) Nissan 350z, R33 Skyline, BMW M3 CSL (monster) and lastly a Mustang GT500 fastback, all of which are his drifting tools.

Hope you enjoyed and learnt a bit about the motorsport called drifting!

Posted by Junaid Samodien at 08:32