That is a simple motorsport equation. Yes, dear reader it is officially another week of schooling you about the world, my world for that matter, which revolves around this form of motorsport. Formula One, also known as Formula 1 or F1 and referred to officially as the ‘FIA Formula One World Championship”. The "formula", designated in the name, refers to a set of rules with which all participants' cars must comply with.

The F1 season consists of a series of races, known as Grands Prix which is held on
purpose-built circuits and public roads across the world. The results of each race are combined with a points system to determine two annual World Championships, one for the drivers and one for the constructors. The racing drivers (Fernando Alonso, Lewis Hamilton), constructor teams (Ferrari, Mclaren, Redbull, Mercedes etc), track officials, organisers.

Caption: These are a few teams in Formula 1.
Source: f1wolf.com

Formula One car’s are the fastest circuit-racing cars in the world and this is a fact, owing to very high cornering speeds achieved through the generation of large amounts of aerodynamic downforce. Formula One cars race at speeds of up to 340 km/h with engines limited in performance to a maximum of 18,000 (RPM) in relation to the rules and regulations put in place by the FIA. The cars are capable of lateral acceleration in excess of 5 g in corners. The performance of the cars is very dependent on electronics – although traction control and other driving aids have been banned since 2008 – and on aerodynamics, suspension and tyres. 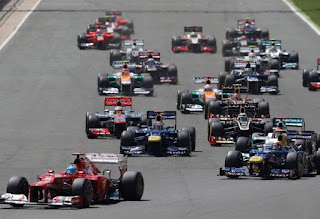 Caption: Fernando Alonso leading the pack into the first corner in the 2012 season.
Source: mail.com

Now that you have learnt a bit, let me move on to the technical elements of Formula 1. I truly, hope that you are enjoying this read!

Posted by Junaid Samodien at 09:55