It's race week! Words all motorsport enthusiasts love to hear. This weekend, the RallyX Nordic season continues at Oulu Zone, with the Finnish double-header, that is set to have a major impact on the ongoing title fight.
Coming off the back of a hugely successful weekend at the iconic Höljes circuit in Sweden a few weeks ago, Niclas Grönholm is back for more RallyX Nordic action. Having secured consecutive wins on his season debut, the Finn is joint-fourth in the standings despite missing the opening double-header and will hope to get the better of his rivals on home soil in OuluZone this weekend.
Fresh from the oceans of Senegal, Johan Kristoffersson will have his work cut out for him, as he has a giant target painted on his back. The Swede currently leads the Supercar standings after a victory and two second-place finishes at the opening four rounds of the RallyX Nordic season.
Kristoffersson will have one target on his mind - to consolidate the top spot in the standings.
The Swede's nearest rival, Fraser McConnell is just 13 points behind after a challenging weekend in Höljes, whilst Sondre Evjen is only four points further back and will be a mission to close the gap.

Grönholm will be joined on track by fellow countrymen and World RX racer Juha Rytkönen. The Finnish national rallycross champion took a surprise second place on his debut at Kouvola last year and is an exciting addition to the field.

The high-octane action-packed racing will be broadcast live, free and in high-definition at tv.rallyx.se, with the racing set to get underway on Saturday, 5 June and concluding on Sunday, 6 June. 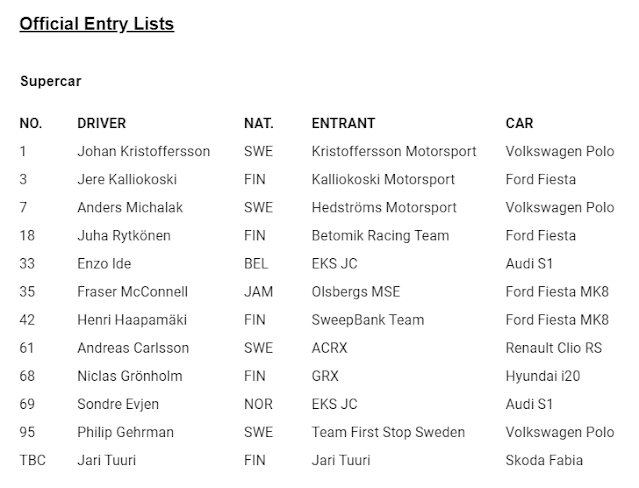 Posted by Junaid Samodien at 17:04