RallyX Nordic returns this weekend at the iconic Höljes circuit, with the Swedish double-header, that is set to serve up another dose of top-class action.

Missed the season opener in Denmark? Don't worry! Here's a quick round-up of events. Fraser McConnell grabbed the headlines in round one in the Supercar class in Nysum, with the Jamaican putting in a stellar display to get the better of Johan Kristoffersson and secure his maiden RallyX Nordic victory.

The 22-year-old started the final on the back row of the grid but a lightning launch in his Olsbergs MSE Ford Fiesta saw him go door-to-door with his established rivals before he claimed an advantage that he would not relinquish.

However, the three-time World Rallycross Champion Johan Kristoffersson fought back on Sunday with an unrivaled display having overcome a number of technical issues. He even at one point he entered Turn One backward - and finishing the weekend on top of the championship classification.

The Super Swede will return to the RallyX Nordic Championship this weekend.

"It will be exciting to continue working with the development of our own car," Kristoffersson said. "And Höljes is one of the coolest tracks in the world, so of course, you want to be part of it."

Kristoffersson currently leads the Supercar class with 56 points, five ahead of former teammate Sondre Evjen, with Fraser McConnell in third on 47 points.

Among the well-known names returning for rounds 3 and 4, Niclas Grönholm returns in 2021 along with Krisztián Szabó, and Anton Marklund.

The Finn expects to have a pretty competitive weekend in his Hyundai i20 Supercar.

"I’m looking forward to the RallyX Nordic race at Höljes, it’s a track I enjoy driving on. We did that race last year and it was pretty competitive – I expect it to be the same this year too," Grönholm said.

"We have some small things on the car we would like to test, and what better way to do that than in a race against some good drivers and cars. It’s going to be interesting to get racing again after a long break, so it’s going to be very exciting."

In a first for rallycross, the Höljes doubleheader will see electric rallycross cars compete alongside internal combustion-engined Supercars, with Manfred Stohl's team joining the line-up in a Ford Fiesta ERX [Projekt E Supercar].

But, wait there is more! Extreme E racer Catie Munnings is linking with 2019 World RX champions Team Hansen and LifeLive Nordic to compete in the CrossCar/Crosskart category and gain more wheel-to-wheel experience.

Don't miss the live free-to-air broadcasts on tv.rallyx.se this weekend. 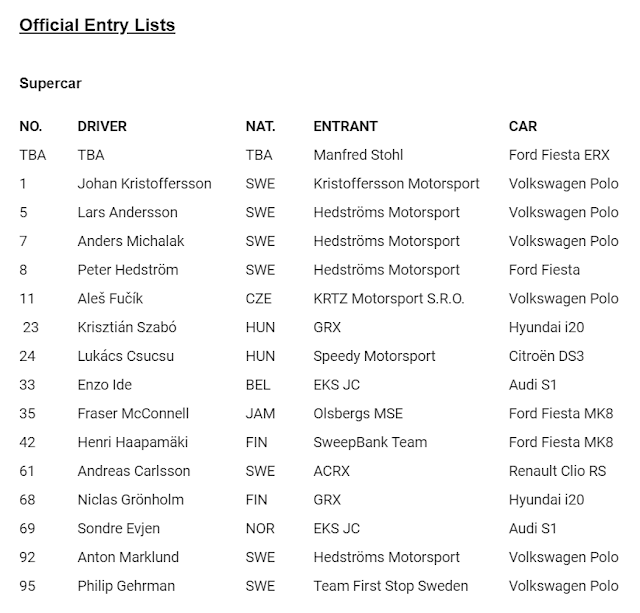 Posted by Junaid Samodien at 20:56