Niclas Grönholm and Fraser McConnell draw level on points midway through qualifying for Round 4 of the RallyX Nordic championship in Höljes.
Both drivers picked up 90 points from their two qualifying heats, both claiming a win and the fourth-best time, which see them on equal points at the top of the Supercar class intermediate standings.
Changeable conditions did not impact the on-track action, as McConnell stamped his authority on Q1, with a mighty strong start out of blocks with Grönholm and Anton Marklund slotting in behind. Thereafter, the Jamaican showed blistering pace in his Olsbergs MSE Ford Fiesta Supercar to win by a margin of 3.055 seconds in Q1.
Having set the fourth-fastest time in Q1. Niclas Grönholm launched a fightback in Q2, and despite not getting the perfect start. He drew level with Fraser and squeeze Marklund and Kristoffersson to back off and slot in behind. On the run into turn 2, the Finn took the joker lap with an aim to benefit in clear air.

Marklund, who was right on the bumper of McConnell spun off from second-place, dropping to the rear of the field on the first lap clearing the way for Szabo, Grönholm, and Kristoffersson behind.

With a clear pace advantage, Niclas latched onto the rear of Krisztian Szabo who strategically jokered on lap 2 to make life easier for his team-mate. The ice-cool Finn started chipping away at Fraser's lead in the wet conditions, and as McConnell jokered. Who emerged in the lead? None other than Niclas Grönholm who won Q2.

Three-time World Rallycross Champion Johan Kristoffersson had a day to forget after suffering from a turbo hose issue, which slowed him down quite considerably in Q1. After two qualifying sessions, Johan is six points behind Grönholm and McConnell in the intermediate standings, with his immediate championship Sondre Evjen a point further back in fourth.

What will happen on day 2 is anyone guess? But it's all to play for tomorrow! 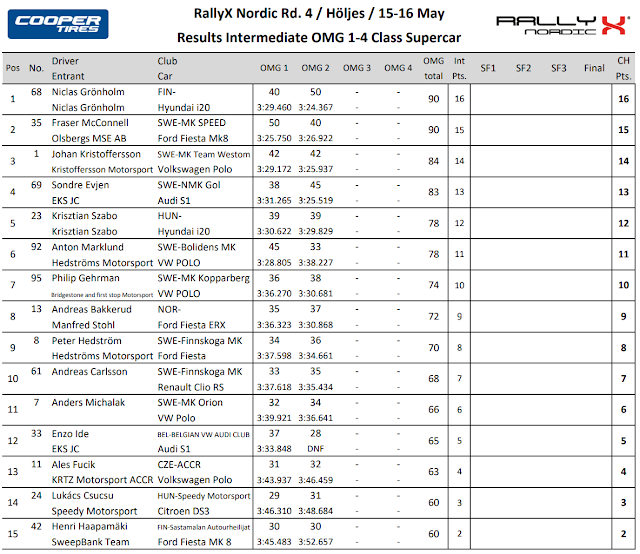 Posted by Junaid Samodien at 20:10