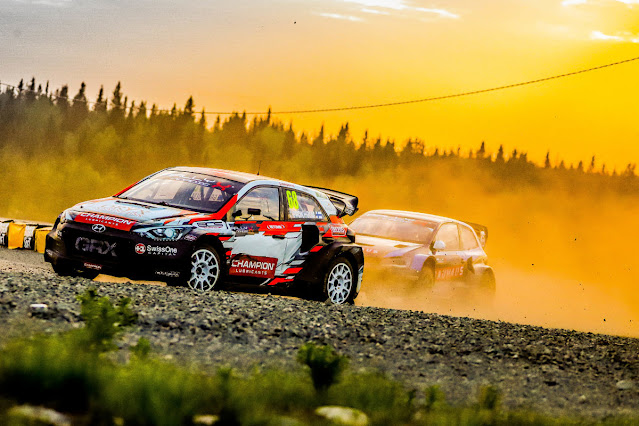 Niclas Grönholm gained his revenge over Johan Kristoffersson with victory in Round 6 of the RallyX Nordic Championship at OuluZone, Finland (yesterday).

The Finnish race winner, who was leading the Round 5 final before suffering a puncture, looking unstoppable on Sunday, when he set the fastest time of the weekend in Q1 - beating Johan Kristoffersson in the process.

Both drivers won their respective semi-finals, setting up yet another thrilling final, with Kristoffersson getting a marginally better start than Grönholm, but with an inside line, it was slightly easier to defend. Trying to outfox his Finnish rival, Kristoffersson ran quite wide into turn one to carry a bit more speed, but ultimately Niclas powered his way into the lead, and the rest is history.

"This was revenge for yesterday [Saturday] – that sucked. It all seemed to go my way yesterday until the puncture so very happy to get the win here today. I was a bit nervous all day to be honest, we haven’t had good launches, and starting on the inside has been really tricky – I think it’s the worst spot on the grid!" Grönholm said. "I had a decent launch in the final though, the car was stalling a bit and I couldn’t hold it anymore and Q3’s launch was a bit worse than that, three of our starts we struggled with stalling."

"Johan [Kristoffersson] took me after turn one for the first few meters over the bump but then I got him on the gears. Johan was close on the first lap, that’s been the same all weekend. For me, the second or third lap has been the best once the tires get up to temperature. The first lap I’ve generally been quite cautious, I was trying to avoid any mistakes and obviously go carefully over the bump after yesterday."

Right behind them came, Juha Rytkönen, who was quite impressive securing third on his return to RallyX Nordic having shown strong pace throughout the weekend in his Betomik Racing Team prepared Ford Fiesta.

Grönholm's victory sees him climb to second in the championship standings despite missing the season-opener at Nysum, having won three times in four appearances.

"We came here to get more racing under our belts and to compete against Johan and the other guys in this series so we're very happy to get the win and get more time in this car," the 25-year-old said. "We learned a lot this weekend, what works and what doesn’t and there’s obviously a lot of tarmac here so it's useful to know these things for when conditions are similar to this."

So, will Niclas return to potentially challenge Kristoffersson in the RallyX Nordic final in Arvika?

"No! I don't think so!," Grönholm said. "This was the extra round for me. It was quite close to come here... only a nine-hour drive."

Posted by Junaid Samodien at 12:26