“Nothing is more dangerous than an idea, when you only have on idea” (Alain) 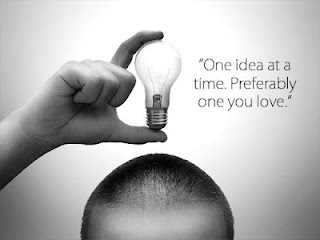 Caption: depending on your level of achievement and knowledge, one idea could be the best.
Source: ziyadnazem.info

My understanding of the statement, would be that when a person has only one idea, then this person would then be at risk of just seeing things in that one way or view, or becoming obsessed with the one idea to such an extent that he or she would fail to see all the opportunities that would come their way.

Having something to focus on or a goal in life could lead to an obsession to a certain extent, due to you being more worried about it than anything else. At the rate that we are developing, we need three types of goals namely:
1. Career goals.
2. Personal goals.
3. Community goals.

Aligned to these goals should be the expectations and methods of achieving them and YES its says goals which means more than one, because you need to have an idea of how you would achieve it.

The more ideas you and I have the more you end up getting things right or wrong. For example, swimming, for the first time you won’t be able to swim (no ideas), you then learn how to float and then kick which then leads to you swimming (first idea), you then gain momentum and you begin swimming which leads to a variety of ideas such as breathing, speed etc. We all learn different disciplines at our own space but it’s good to have more than one idea or concept.

Posted by Junaid Samodien at 11:46