A tribute to a living legend 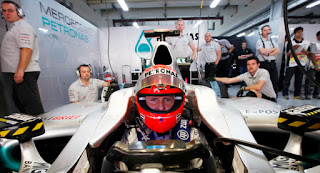 
This week we turn our attention to a living legend, Michael Schumacher born 3 January 1969. Michael Schumacher is a German Formula One racing driver. Schumacher is a seven-time World Champion and is widely regarded as one of the greatest F1 drivers of all time. He holds many of the formula's driver records, including most championships, race victories, fastest laps, pole positions, points scored and most races won in a single season – 13 in 2004. In 2002 he became the only driver in Formula One history to finish in the top three in every race of a season and then also broke the record for most consecutive podium finishes. According to the official Formula One website he is "statistically the greatest driver the sport has ever seen". In 2009, a poll of 217 Formula One drivers conducted by the British magazine Autosport named Schumacher the second-greatest F1 driver of all time, behind Ayrton Senna. As of the 2012 Formula One season Schumacher is the only driver left competing in Formula 1 to have raced against Ayrton Senna and Alain Prost, whose record of total career wins he beat with his 52nd win at the 2001 Belgian Grand Prix. 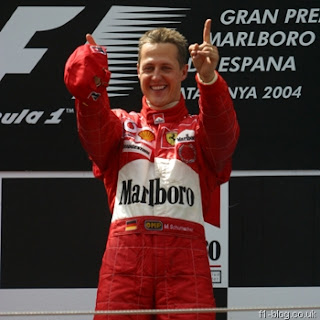 Caption: Michael Schumacher on the poduim at the Spanish Formula 1 GP in 2004.
Source: Googleimages
After beginning with karting, Schumacher won German drivers' championships in Formula König and Formula Three before joining Mercedes in theWorld Sportscar Championship. After one Mercedes-funded race for the Jordan Formula One team Schumacher signed as a driver for the Benetton Formula One team in 1991. After winning consecutive championships with Benetton in 1994/5, Schumacher moved to Ferrari in 1996 and won another five consecutive drivers' titles with them from 2000 to 2004. Schumacher retired from Formula One driving in 2006 staying with Ferrari as an advisor. Schumacher agreed to return for Ferrari part-way through 2009, as cover for the badly injured Felipe Massa, but was prevented by a neck injury. He later signed a three-year contract to drive for the new Mercedes GP team starting in 2010 and is currently is his last year, in where he has stated that he will retire from Formula 1 at the end of this season, as Lewis Hamilton will take his place at Mercedes GP for the 2013 season.

Posted by Junaid Samodien at 13:14