RallyX Nordic title fight goes down to the wire at Arvika

The 2021 RallyX Nordic Championship will reach a dramatic conclusion next week at Arvika, Sweden, as Johan Kristoffersson heads into the final round of the season top of the Supercar standings, and on course to clinch the title in his Kristoffersson Motorsport-run VW Polo.

27 points clear of his nearest rival - fellow World RX rival Niclas Grönholm, who will not be competing at Arvika - and a further two ahead of EKS JC's Sondre Evjen, with the Norwegian the only driver mathematically capable of denying Kristoffersson the title.

Meanwhile, fourth-placed Fraser McConnell will be hoping for a better turn of fortune in Sweden having claimed his first Supercar victory at the season-opener earlier this year.

The Jamaican is just one of several other potential race-winners on the entry list.

Hedströms Motorsport is fielding a formidable squad, with Anders Michalak and Peter Hedström joined by World RX regular Anton Marklund and Dan Öberg – who recently stepped up to the top tier after impressing in RallyX Nordic and Euro RX last year.

Elsewhere, Philip Gehrman will be behind the wheel of an Audi S1 for the first time, whilst Kevin Eriksson makes a guest appearance for Olsbergs MSE in a Honda Civic.

Where to Watch The Season Finale?

All five classes will be broadcast live, free and in high-definition at tv.rallyx.se, with the racing set to get underway on Friday, 13 August and concluding on Sunday, 15 August. 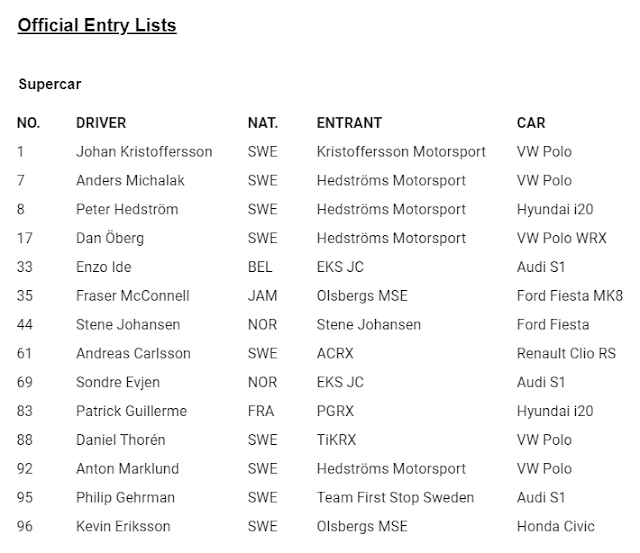 Posted by Junaid Samodien at 16:36