It all looked set for a humdinger of a weekend in Sweden, as championship leader Kevin Hansen led the championship with reigning champion Johan Kristoffersson looking to claim his first victory of the season but, the Hansen's had other plans.

Johan might have won Q1 on Saturday, but Timmy Hansen fought back to level things out on Sunday.

Having battled through Q3 and Q4, Timmy Hansen led the intermediate rankings ahead of the reigning champion Kristoffersson in second followed by an impressive Kevin Abbring, Krisztián Szabó, Niclas Gronholm, and Kevin Hansen.

In the first semi-final, Timmy led home a fast charging Abbring and Juha Rytkönen to seal a place in the final, whilst Kristoffersson failed to finish due to a front-right puncture that ended his weekend rather prematurely.

Round one winner, Kevin Hansen capitalized on Johan's disappointment winning semi-final two ahead of Szabó and Belgian Ide also qualifying for the final.

The Hansen brothers locked out the front row of the final on used tyres, with those behind bolting on new tyres.

From pole position, Timmy had a very good start with Kevin holding the outside line into turn one. Opting for an alternate strategy, Kevin Abbring and Enzo Ide took her jokers on lap one. Whilst Timmy led Kevin followed by Rytkönen and Szabó.

As the Hansen brothers' pulled clear of their nearest rivals, Rytkonen and Szabó came under pressure from a charging Abbring.

The Dutchman ultimately jumped both of them as the race progressed, with Timmy and Kevin taking their joker on the final lap to record another 1-2 and claim an 11th career race win.

It wasn't all smooth sailing with constant adjustments and tweaking (including a gearbox change for Kevin Hansen) throughout the weekend to unlock more speed.

"Our mechanics are the winners keeping our cars together. Sometimes we take it for granted and it is a reminder of the incredible work they are doing. I am so, so happy. 1-2 again," he said.

The 2019 World Rallycross Champion now holds the lead in the championship after two rounds (on 57 points) six points ahead of Kevin Hansen, with Szabó third followed by Abbring with reigning champion Kristoffersson down to fifth. 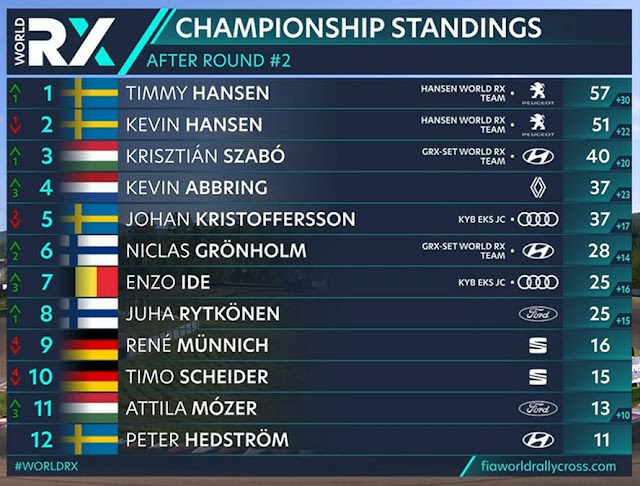 Posted by Junaid Samodien at 21:52