The McLaren is not losing enamel. Lando Norris will long remember the MCL35M as the first car that, not only did he understand perfectly, it allowed him to hit that very subtle balance that allows him to stay on the limit for as long as necessary, avoiding mistakes. In addition to Sir Lewis Hamilton's radio certificate of esteem, “Such a great driver, Lando”, the Englishman claimed an extraordinary front row and the podium, probably the most deserved of the year.

He is making the difference in the fight with Ferrari up to now, in addition to the horsepower and the efficiency of the Mercedes Power Unit: 40 hp more than the drivers in red are more than compensating for Daniel Ricciardo's delay.

Nonetheless, Seidl, someone who has a deep knowledge of racing, does well not to underestimate Ferrari for the still long and uncertain continuation of this season. He knows perfectly well that many points have been left on track by the Italian team, sometimes due to small errors, others unfortunate as in Imola.

But it's fair to say that McLaren and Lando Norris were there when they had to. When those in front had a hard time. We have not only seen it in Austria, “which we have to be realistic, but it was also a suitable track for our car” according to Seidl. Norris took advantage of practically every gap from the start, setting the season very well with the team right from the tests.

In the last qualifying session, he was the driver who earned the most between Q2/Q3 about 7 tenths. Were it not for the accentuated understeer in the last two corners, he could also have claimed pole position.

The MCL35M is a super-efficient car that doesn't put a lot of energy on the tyres unless you decide to 'smash' them with setup. The C5 Soft 'disposable' compounds have certainly helped, on a track, albeit a demanding one also for the traction phase, but with fewer heating problems than the front ones compared to Baku, with the MCL35M being able to make the most of the extra. grip offered.

The Englishman brings his McLaren to impressive levels as well as his trend, which even shows a slight approach to Mercedes while Red Bull took off on the W12, on average 2 tenths ahead in the Austrian events.

The continuous innovations introduced by Red Bull and McLaren are working, while for Brackley, it is now evident that the optimization of the W12 is not enough, so much so that the first real updates for the car of the world champion team will arrive at Silverstone.

Aside from a more normal performance in Spain, Lando has developed very well every weekend. If a positive result was expected in Austria for the characteristics of the track that greatly rewards efficiency, the Monaco podium, taking advantage of Leclerc's debacle and Bottas' problem, it seems, is the photograph of this first part of the season.

Ferrari and McLaren are very close, but the Woking team made no mistakes and are deservedly ahead.

We know the MCL35M is a very effective car on the straight, it is not so much the one with the highest speeds, but it is the one that reaches them first, even if traction is not the real strength, especially towards the SF21. After an initial and more uncertain phase of understanding, which also happened to Red Bull, the updates have improved the car's loading points, making it more consistent especially in the distances and out of corners when the track allows you not to jump on curbs or bumps.

Stability was affected in a positive way, automatically also the ease of balancing it. This would have helped Norris to boost performance and Daniel to get closer to finding a car with more load in the medium-slow sections.

In this phase, McLaren seems to have reached a 'beneficial' efficiency, not too far macroscopically to the Ferrari SF90. Clearly, the regulatory aerodynamic cut has flattened the differences with a W12 that has seen the strengths of the 2020 car eliminated.

Why does Ricciardo struggle? In the ninth race, a new driver, especially if he is of high profile and experienced like him, should be able to be quite close to any teammate but this was not the case for the Australian.

The good race at the Red Bull Ring only partially redeemed the disappointing qualifying but above all, it gave us some more information on why the difference is so great.

According to the data collected, Daniel still loses a lot compared to Norris in the slow medium corners. The more the corner is high speed, the more the difference with Norris becomes thinner. It is mainly a matter of interpretation.

“We have made some important steps forward from the start of the season to now, but to get the most out of our car we need a special driving style which is not natural for Daniel. For this reason, it fails to be effective,” Seidl said a few weeks ago.

Ricciardo has certainly not unlearned anything, but he has driven all high-downforce, high-rake cars throughout his career; Red Bulls were undoubted, as was Renault, especially the one from two years ago, albeit with a lot of drag. The MCL35M, on the other hand, is very different and uses a much less pushed rake setup, slightly lower than last season's MCL35.

Before the Baku GP, the Australian spent many days in the simulator trying to take a step back and figure out what was wrong with his driving style. “I'm trying to adapt it to make the car work better. Sometimes it's frustrating to see that what you've been doing for years with other cars doesn't work, but as I said, I'm taking a step back and I think this has led me to understand a few things about how to better interpret the car”. 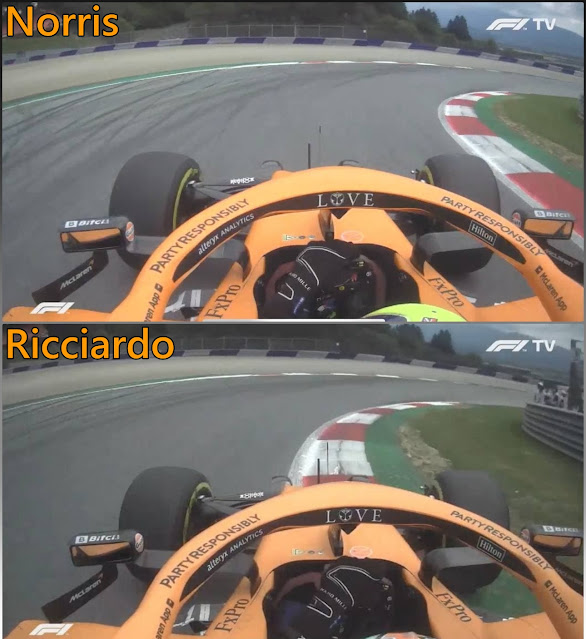 This corner approach aspect is something that requires a substantial change of approach. In Austria, we saw Norris bring a lot of speed into the corner by often sacrificing the apex of medium-slow corners by clearly prioritizing wider and faster sliding. This minimizes traction as much as possible which is not the strongest point of McLaren, unlike Ferrari. Take full advantage of mid-corner stability, further improved with the latest updates, rather than letting yourself be slowed down by a vain search for agility when entering and exiting. Then let the aerodynamic efficiency and the Mercedes power unit, does the rest on the straight.

Ricciardo otherwise seems to feel better using the curbs more, closing the car more to straighten it quickly on the way out, a bit like Leclerc drives the SF21 with corner set a lot to V-shaped and less to U. But with the MCL35M it doesn't work. It's a question of feeling, style, habit and obviously trust.

The key can be to trust the car a lot more when driving, modifying some of its fundamental preferences even using a little more 'dirty' load than Lando if necessary and a little better understeer. An even stiffer and more drag car could help.

Posted by Junaid Samodien at 18:07