Sweden’s Kevin Hansen claimed victory in a closely fought World RX of Catalunya, round one of the FIA World Rallycross Championship.

The Hansen World RX Team driver claimed his first win on track beating his older brother and three-time World RX Championship Johan Kristoffersson. Statistically speaking it's his second ever win in the championship but his first on-track win.

One could argue that the entire weekend revolved around Johan Kristoffersson's disqualification from Q1 on Friday evening after a "data logger" was not connected for the session, which meant Timmy Hansen took the overall lead after day one.

Whilst Kristoffersson launched a fightback winning both Q3 and Q4, he finished sixth overall in the intermediate rankings meaning he made the semi-finals but would start behind the Hansen brothers on the second row of the grid.

The semi-final(s) was action-packed from start to finish with Timmy leading into turn 2 covering off an attacking Krisztian Szabo and Timo Scheider behind. Unfortunately, Scheider came off worse ending up in the barrier and ripping off a wheel. His dream of making the final was over!

Kevin, hungry for victory in Barcelona lead off the line but behind his Peugeot 208, it was pretty messy as Niclas Gronholm's race ended in the barriers. And, as the semi-final progressed, Kristoffersson was a man on a mission, but the younger Hansen brother hung on and to win semi-final 2 meaning he would line up alongside Timmy for the final.

All set for the final in the cooling Catalan evening, the Hansen brothers had good launches off the line with Kristoffersson trying with all his might to get through from the second row of the grid. However, with a clever strategy, the Hansen World RX Team duo covered off the drivers behind and hung on to 1-2 on lap one.

Opting for an alternate strategy Kristoffersson on lap 2, he took the joker lap, and we all know that over the years if you offer the three-time World RX Champion clean air he'd likely close the gap and win.

But, with a strategic masterstroke played by Hansen brother, Timmy jokered on lap 3 to cover off the KYB EKS JC driver and comfortably come out ahead, but he got stuck behind Krisztian Szabo who jokered a lap later.

A lap later, Kevin took his joker (on lap four) and came out alongside his elder brother to sweep into the lead from the outside line where he would remain until the checkered flag.

Kevin ended the final 0.141s ahead of his older brother Timmy Hansen and ahead of Johan Kristoffersson to claim an emotional victory in Catalunya.

"If I look to the left or I look to the right. There are four world championships on either side of me and I beat both of them," Hansen said. "I worked so hard for this when I put a lot of effort during this winter to make changes."

"We had an opportunity when Johan did a mistake with their car (Q1 DSQ) and we took that opportunity. We had to fight for it for sure, but we had the advantage of track position. And it's so important to get the points."

"I'm super happy how I came back and, you know, took revenge on myself and just head down and worked for it. So I mean, to get a win in the championship like this. And I think leading the world championship to you know, it's been three years since I did last time," he concluded.

The 2019 World Champion admits that he is super proud of his younger brother winning in Barcelona today, despite finishing second and holding off a fast-charging Kristoffersson.

"I'm super proud of Kevin," Hansen said. "He did a fantastic job, of course. And I think both of us keeping it cool through qualifying and the first quarter through the final."

"We had a plan of how to exit the first few corners in first and second place and we executed that. After that, of course, Johan was incredibly fast. So to kept track of position, we had to copy his strategy."

The 29-year-old Swede admits that he lost time behind Szabo and could have won, but it wasn't to be.

"Because I covered Johan I was held up, although I wouldn't have needed more than a few hundredths coming out of that last corner," he said. "So I mean, could have been mine today, but it wasn't in the end. But still, this feels like a win for four for our team and for our family."

After the disappointment of being disqualified from Q1, Kristoffersson can be proud of his fight back! He admits that he was hoping for more this weekend after the pace he had shown.

"We're on the podium. So, you said that to me on Friday morning. I will definitely take it. But after the pace we've shown, of course, we would like to have more. But at the same time, you know, like in semi-final and final, I don't want to be to risk it too much and be on the wrong side to pick up the penalties or try to to be aggressive but still driving fair. So there was no real way around," Kristoffersson said. "The pace of the car is fantastic and the team has done a great job. So that's that's bright for the future."

The action returns next month with round two of the FIA World Rallycross Championship in Holjes, Sweden (20-22 August). 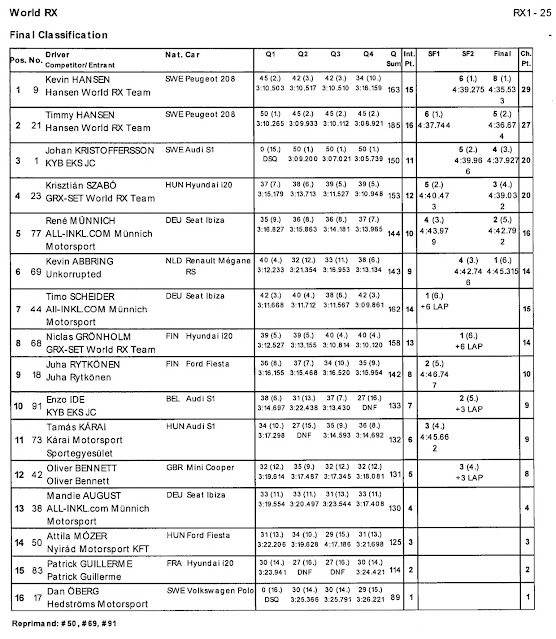 Posted by Junaid Samodien at 22:39