PREVIEW: The scene is set for a thrilling World RX curtain-raiser in Catalunya.

The long winding road is almost over. In less than three days' time, the FIA World Rallycross Championship will kick into life at Circuit de Catalunya-Barcelona for the eagerly-anticipated 2021 curtain-raiser - World RX of Catalunya - as the battle begins for the series' final petrol-powered champion.

It all seems new with the arrival of Rallycross Promoter GmbH, the new liveries, testing completed, and 17 of the best drivers heading to Spain.

Not only are there new faces in new places, but the Barcelona track itself is also set to post drivers a fresh challenge, with the notoriously tight Turn One left-hander that saw tons of action in 2020, now replaced by a wider, sweeping first corner.

But wait, there's more!! The format has also undergone a shake-up, with the action due to kick off in the afternoon and continue into the evening on both days.

The king is back in town! Defending world champion Johan Kristoffersson leads the line-up, but the Swede – three times a title-winner in rallycross – has switched cars over the off-season.

The Swede is preparing to fight for his fourth Drivers’ title behind the wheel of an Audi S1 Quattro, fielded by the KYB EKS JC outfit, which claimed the Teams’ trophy in 2020 at its first attempt.

Kristoffersson will be partnered by ever-improving Enzo Ide, while siblings Timmy and Kevin Hansen similarly have their eyes fixed on the main prize for family-run squad Hansen World RX Team.

Timmy, the older of the two Swedes lifted the laurels in dramatic fashion in Cape Town two years ago and – like Kristoffersson – was a winner in Barcelona back in October, so is sure to be a threat from the outset.

Younger brother Kevin, meanwhile, has reached the rostrum on seven occasions over the past two campaigns and is bullish about his prospects for success behind the wheel of the team’s proven Peugeot 208.

Niclas Grönholm might not be a world champion YET but the Finn has come extremely close in 2019 when an early-season bout of appendicitis almost certainly cost him a shot at the crown, and in Hyundai i20, he has a potent package at his disposal. The same can be said for team-mate Krisztián Szabó, as the Hungarian returns for his second full season at the highest level.

After impressing in a number of one-off appearances – even leading the final on his debut in Norway two years ago –  Kevin Abbring, at last, gets his big break in rallycross this season in an UNKORRUPTED Renault Mégane R.S. RX, while two-time DTM champion Timo Scheider achieved his maiden World RX podium in Barcelona in 2017 and is fired-up to produce a repeat performance in his ALL-INKL.COM Münnich Motorsport SEAT Ibiza.

If you are looking for another potential dark horse, look no further than Juha Rytkönen. In Kouvola last summer, he dueled with Kristoffersson before going on to finish an excellent second.

The flying Finn is back for another crack in 2021, rejoining the fray in a Betomik Racing Ford Fiesta, and is determined to show that his scene-stealing debut was no flash in the pan.

Fresh in 2021, the supporting FIA RX2e Championship, fans will get a glimpse of the sport’s new era as an intriguing mixture of young stars and experienced hands go door-to-door in the quest to secure the first-ever FIA electric rallycross championship title before the World Championship follows suit from 2022.

So, let's learn a bit more about the new RX2e car.... The RX2e 'pocket rocket' incorporates a motor on each axle that together delivers 250kW (335bhp) of power and up to 510Nm torque is certain to produce some superb racing as it puts driver skill firmly at the forefront.

WHERE DO I WATCH THE ACTION?

Racing is set to begin at 15:45 CET on Friday afternoon (23 July), with all of the action across the board to be livestreamed in glorious HD quality via the new RX+ broadcast platform.

WITH A NEW PROMOTER COMES CHANGE... Change is something that no one really likes, and having enjoyed hours, upon hours of free live streams and TV broadcasts. At first glance, it appears that the luxury has come to an end as no broadcast deals have been announced (yet).

The 'Voice of World RX' Andrew Coley will not return to lead commentary in 2021 after a completely new presenting line-up was announced a few weeks ago. Martin Haven and Nick Fellows will lead commentary, with Hal Ridge joining them as the expert commentator. Joining them are Neil Cole, Molly Pettit, and Ben Constanduros who will share studio and paddock reporting roles. 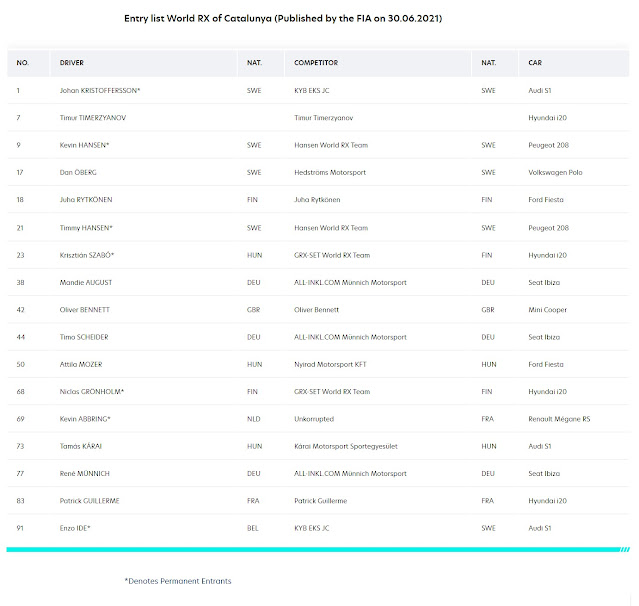 Posted by Junaid Samodien at 16:32