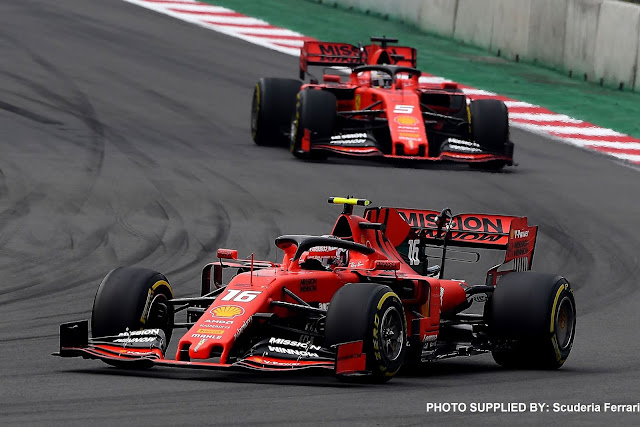 This weekend’s race will be the 41st race to go by the name of United States Grand Prix to count towards the World Championship. However, there have been a total of 69 Formula 1 races held in the United States, including eleven editions of the Indianapolis 500 and 18 other Grands Prix. Two of those were even held in the car parking of Caesars Palace in Las Vegas. Scuderia Ferrari has won a total of 13 times here.

Indianapolis and then Sebring. One race in America even featured in 1950, the very first year of the World Championship. It was the Indianapolis 500 and it was part of the calendar up to 1960, as an attempt that never really succeeded, to bring together the different worlds of European and American racing. Scuderia Ferrari had a go at winning this race on the famous oval, in 1952 with Alberto Ascari, but the Italian retired. The first real United States Grand Prix was held in 1959 at Sebring and was won by Bruce McLaren in a Cooper, with Tony Brooks third for Ferrari. The following year, the race moved to Riverside, but the Scuderia did not take part.

The long wait. Scuderia Ferrari had to wait until 1975 to see one of its drivers stand on the top step of the podium in the USA. Niki Lauda, who had already secured that year’s title, won in dominant fashion at Watkins Glen, the track in upstate New York, which hosted 20 editions of this race. The following year it was the Swiss Clay Regazzoni’s turn to celebrate, when he won at Long Beach, which, for eight years, hosted races when the USA boasted two events per season on the F1 calendar. At the end of the Seventies, there were two fantastic double victories, the first in 1978 with Carlos Reutemann winning in Watkins Glen and Long Beach, a feat repeated by Gilles Villeneuve the following year.

Return to Indy. Throughout the Eighties, the United States remained on the calendar with races at Las Vegas, one in Dallas, seven in Detroit and three in Phoenix from 1989 to 1991. After that, the race fell off the calendar and did not return until 2000. This time it was held on a purpose built track using the infield, which linked into Turn 1 on the oval, running down the main straight albeit in the opposite direction to the Indycar race. Michael Schumacher and Ferrari baptised the new track in fine style, winning the opening Grand Prix, which laid the groundwork for winning that year’s title.

The golden years. The new Indianapolis circuit became the scene of a whole string of successes for Ferrari. In 2000, its two cars took the flag in line abreast, evoking memories of that great sports car win in the 1967 Daytona 24 Hours. The unusual aspect on the day was the fact that while trying to cross the line together, Rubens Barrichello, intentionally or otherwise, hit the throttle pedal fractionally too hard to beat Schumacher to the win by just 11 thousandths of a second. After that, the German won four times in a row, from 2003 to 2006, the penultimate year that an F1 race was held at Indy.

In Texas. The United States Grand Prix returned to the calendar in 2012 on the brand new Circuit of the Americas or COTA as it is known, located on the outskirts of Austin in the Lone Star State. Designed by the specialist track architect Hermann Tilke, it is a spectacular venue that climbs and drops in the Texan landscape. Scuderia Ferrari Mission Winnow won here last year courtesy of Kimi Raikkonen. For the Finn, who won the world title with Ferrari in 2007, it was his tenth win for the team, 9 years and 52 days after the previous one at Spa-Francorchamps in 2009. As for the current drivers, Sebastian Vettel won here in 2013, while Charles Leclerc, on his only appearance last year, was involved in an incident in the early part of the race and later had to retire.


Charles Leclerc #16
“I really like being in the United States and the city of Austin is amazing. It is just a great location and the atmosphere around the whole event is special, different to what we usually have.

The circuit itself is also quite unique. Inspired by parts of some of the most iconic race tracks around the world, it gives us drivers a really nice challenge.

With a long straight and a lot of different types of corners, you have to make sure to find the right balance for the car. It is also one of the few tracks to run counter-clockwise, so that mixes things up for us in the cockpit, too.”


Sebastian Vettel #5
“The US GP in Austin is a very different proposition to the high-altitude of Mexico. The Circuit of the Americas is an exciting track, with a wide range of cornering speeds and lots of changes of direction. It’s quite bumpy, particularly in the big braking zones so it’s easy to lock wheels there. The strategy choice is quite open, with both one and two-stop plans looking possible.

It’s a tricky circuit to get the tyres into the right performance window, so Friday running is important to understand the tyres and get prepared for the race.

Last year’s event was difficult because none of us got much useful running due to the poor weather on Friday. The forecast for this year is dry but quite cool. It should be a good circuit for us but, as we saw last year, we can take nothing for granted and the competition is also strong.”


Mattia Binotto Team Principal
“We have started the last six races from pole position but have only gone on to win three of them and we certainly want to do better than that. We are encouraged by the fact that we now have a package that allows us to fight for wins on most tracks. It’s a significant improvement on how we started the year and credit must go to all the people in Maranello and at the track, who have worked so hard to fight back from where we started.

We need to use the last three races of this season to further develop as a group and to operate in the sharpest possible manner in order to be better prepared for next year. It is a very tight field at the front and every detail matters if we want to win more often.

Austin will hopefully give us a good opportunity to do so. It is a very challenging track with many different combinations of corner. Of course everyone will be looking to see what happens with the tyres after the surprising longevity of Pirelli’s hard compound last week in Mexico. We are aware that every track can produce its own particular surprises and our aim is to be ready to react to whatever situation might arise.

Finally, it’s always special to race in the US, a country with a huge history of motor racing. We won here last year and the team’s motivation will be to try and bring home a very good result”.

PREVIEW PROVIDED BY Scuderia Ferrari
Posted by Junaid Samodien at 16:10