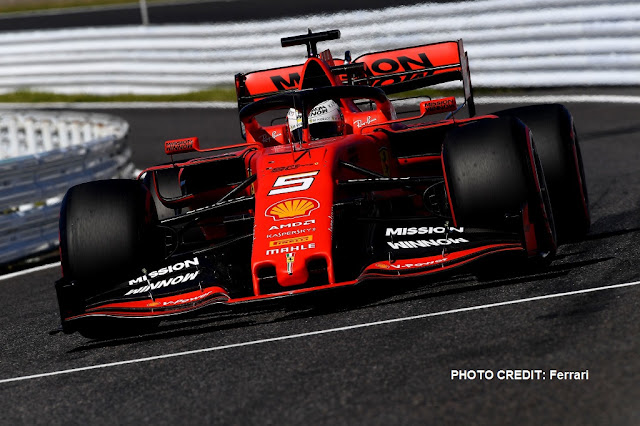 This weekend’s race will be the twentieth Mexican Grand Prix. The race has always been held at the same venue, although its name and layout have changed over the years. The track is not far from the centre of Mexico City, at the vast Magdalena Mixhuca sports complex after which it was originally named and which also hosted the 1968 Olympics. It features a long straight, a mixed middle sector and a final part featuring the Peraltada, much modified today from its past as a parabolic corner reminiscent of the one at Monza.

Early years. Mexico’s inaugural Formula 1 race was held in 1962 and was a non-championship event. The win went to Jim Clark, who took over Trevor Taylor’s Lotus after his own car broke down. The event was marred by the death of the local youngster, Ricardo Rodriguez. It was also a sad loss for the Scuderia, which had an agreement in place with the Mexican that, the previous year, had seen him become the youngest ever driver to make his Formula 1 debut with the Maranello team, at the age of 19 years and 208 days, a statistic which still stands today. The following year, Scuderia Ferrari took part in the first race to count for the world championship, but posted a double retirement with John Surtees and Lorenzo Bandini.

The second title. In 1964, Ferrari turned up with the same driver pairing, along with Ricardo Rodriguez’s elder brother, Pedro. The three cars raced in the colours of the North American Racing Team (NART) because at the time, Enzo Ferrari was at loggerheads with the Italian sporting authority that had not supported his homologation as a GT car of the 250 LM destined for the Le Mans 24 Hours. This was the last race of the season and both titles were still up for grabs. The contenders were Graham Hill in the BRM, Surtees in the Ferrari and Clark in a Lotus. Clark led from the start, followed by Dan Gurney in the Brabham, while Surtees was fifth. Hill and Bandini were having a good scrap for third, but when the championship leader Hill tried to pass the Italian, they collided. Hill spun and was out of the race. It looked as though Clark was therefore heading for the title, but with ten laps to go, his car began to have some problems. Ferrari ordered Bandini to let Surtees pass into second place and he won the title when Clark stopped on the final lap. There were great celebrations, as John became the first and, to date the only, driver to win world championships at the highest level on two wheels and four. For the Maranello marque it was its second Constructors’ title.

Crazy one-two. Scuderia Ferrari did not enjoy much success in subsequent years in Mexico City, until 1970, when Jacky Ickx and Clay Regazzoni finished first and second. However, the race was held in chaotic conditions and the start had to be delayed by an hour, when many of the 200,000 strong crowd broke down the crash barriers to stand perilously close to the track. Having repaired the safety installations, the Grand Prix got underway, but as the laps ticked by, the fans once again began to creep onto the grass at the side of the track. Ickx dashed under the chequered flag the clear winner and the crowd surged onto the track to celebrate the Belgian’s win. It meant that Regazzoni and Denis Hulme, second and third, as well as the rest of the field, had to tackle a scary slalom through the crazy crowd. No one was injured, but that was the end of the Mexican Grand Prix for now. The country’s fans suffered another much worse tragedy, when Pedro Rodriguez was killed in an Interserie race at the Norisring, in Germany, in 1971.

Comeback. This race is run at higher altitude than any other, around 2,300 metres above sea level and it returned to the calendar in 1986, with the circuit having been revised and also renamed, Autodromo Hermanos Rodriguez, in honour of the two brothers. Scuderia Ferrari secured a notable one-two here in 1990. Qualifying was difficult: Nigel Mansell was fourth on the grid and Alain Prost way down in 13th. However, it was clear from Sunday morning’s warm-up that the potential of the F1-90 was good enough for the tifosi to dream of glory. Gerhard Berger led in the McLaren from his team-mate, Ayrton Senna, while Mansell was battling Nelson Piquet for third. With 15 laps to go, they were passed by Prost who set off in pursuit of the McLarens, quickly dispensing with Berger. The Frenchman then overtook Senna and the win was safe once the Brazilian had to stop with a puncture. Stealing the limelight from the Frenchman in the closing stages were Berger and Mansell and their duel for second place. For the fans, the crowning glory came with just a few kilometres to go, when the Englishman pulled off one of the most spectacular passing moves ever, passing the Austrian around the outside of the high speed Peraltada.

New era. The Mexican Grand Prix returned to the calendar in 2015, again at the Autodromo Hermanos Rodriguez, although this time the layout had been substantially modified by F1 track architect Hermann Tilke. The most significant change was the disappearance of the original Peraltada, replaced with a very slow part in the Arena section, which actually runs through a huge grandstand from which the spectators get a great view of the cars at slow speeds. Sebastian Vettel took pole in 2017, going on to finish fourth behind team-mate Kimi Raikkonen. Last year, the Scuderia Ferrari Mission Winnow drivers finished second and third in a race won by Red Bull’s Max Verstappen.


Sebastian Vettel #5
“Obviously racing at altitude has an impact on how the car feels. We are racing with maximum downforce level in terms of car setup, but, since we are racing so high above sea level, the air is very thin and the cars actually produce very little downforce.

On the long straight, I think we see the fastest top speeds of the season, which makes it difficult to manage the corners, because we’ve got so little downforce physically on the car. The car is moving around a lot and it’s difficult to get the tyres to work, in fact it’s hard to get the whole car to work and to get the right feel from it. It’s a relatively short lap but not an easy one.

Over the past couple of years, we have been on an upward trend in Mexico, although Red Bull has been the team to beat. But I think the gaps between us are getting smaller, so let’s see how we get on this year.”


Charles Leclerc #16
“The circuit in Mexico is an unusual one. We race at such a high altitude and all the teams try to put as much downforce on the car as possible. Despite that, it still feels quite weird and the grip is extremely low.

I have done one FP1 and one race there, so it’s one of the tracks that is still pretty new to me. I really enjoy driving there, especially because the walls are quite close and this is something I like as a driver.

The atmosphere is amazing and driving through the stadium part of the track is truly unique, because you can see all the fans in the grandstands.”


Mattia Binotto Team Principal
“After two races in which we could have done better, we arrive in Mexico determined to win. We will be aiming for our sixth consecutive pole, before looking to convert that into a victory.
The Mexican track has plenty of elements that can catch you out, some of these linked to the fact we are racing at over 2000 metres above sea level. That makes fine tuning the settings on both the chassis and Power Unit side particularly complex, as the requirements are very specific to this track.

The circuit features a variety of corner types as well as long straights on which, year after year, the record relating to top speeds has been beaten. The necessary compromise between having good top speed and sufficient downforce in the corners dictates the aero settings with which we will take to the track.”

PREVIEW PROVIDED BY Scuderia Ferrari
Posted by Junaid Samodien at 12:56