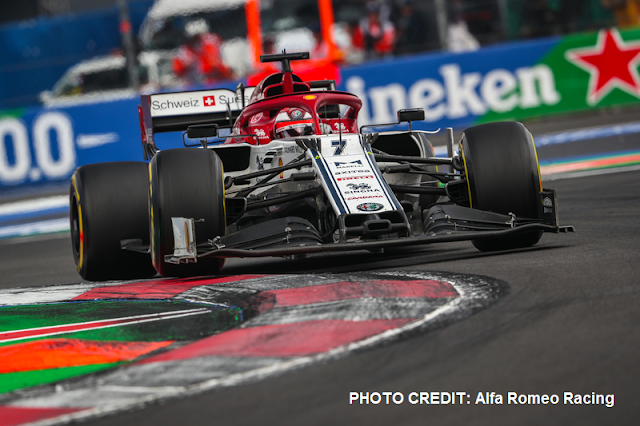 The hill leading up to turn one is an impressive sight, much more so in real life than when seen on TV. It’s a towering climb, quickening the pulse of the engineers doing the customary track walks and providing a challenge to those going for a jog around the Circuit of the Americas. It is also a very challenging corner. With its blind apex, just over the crest, it requires a little bit of a leap of faith from the drivers: they pick their braking spot, dive to the left and, if things have gone to plan, just skim the inside kerb before powering down the other side, taking all of the track as they do so. Go too early and your momentum is lost; slip wide, and you’re going to run out of track at the exit.

The sight of that hill is a happy memory for one of our drivers, of course. Kimi climbed up the steep incline after a great start and powered his way into the lead of last year’s United States Grand Prix: it was the start of a commanding performance, a lead he would convert into the 21st victory of his career.

As he returns to Austin, one year on from that win, the contest for the US GP crown reopens. A whole host of new challengers are ready to pick up the fight, not least our very own Antonio – on his first ever appearance here in Texas. He, too, will climb that hill, test his skills on that very crest and add his name to the list of drivers who took on the challenge.

This weekend, the battle will start again. New claimants to the throne will step forward; a new winner will be crowned. But until moment, Kimi still reigns as the most recent winner here at COTA. The King of the Hill is still wearing his crown.


Frédéric Vasseur, Team Principal Alfa Romeo Racing and CEO Sauber Motorsport AG
“The race in Mexico didn’t go how we expected, but we must not forget it also brought some positives. We have made some steps forward compared to previous races and we need to keep building on those to be a bit more competitive, starting in the United States. Our objectives remain the same, to fight for a place in the top ten, and we know what we have to do to get there.”


Kimi Räikkönen #7
“I have good memories from Austin, especially last year’s race, but that doesn’t really matter when I step into the car this weekend. Every new race is different and we need to focus on doing our job if we want to get some points.”


Antonio Giovinazzi #99
“We’re back in the car this weekend, an opportunity to improve on last week and have a competitive race. We know that to be fighting at the front of the current midfield we have to deliver a perfect weekend and we weren’t able to do so in Mexico, but this is a new race and we will keep pushing as hard as we can.”