The entry lists for the 2021 FIA World Rallycross Championship curtain-raiser in Catalunya next month (23/24 July) have today been revealed, with a 17-car grid for World RX setting the scene for a sensational weekend’s racing in Spain.

The World RX line-up is headlined by defending champion Johan Kristoffersson, who is chasing a fourth World Championship crown this year after switching to Audi machinery for the first time with KYB EKS JC.

Kristoffersson will face a stiff challenge, as 2019 champion Timmy Hansen and younger brother Kevin return armed with their updated Peugeot 208 and Niclas Grönholm hungrier than ever in his Hyundai.

Kevin Abbring should also not be discounted in the UNKORRUPTED Renault Mégane, particularly after his scene-stealing World RX debut in Norway two years ago.

A number of interesting ‘wild cards’, have the potential to spring a surprise, including two-time Euro RX Supercar Champion Timur Timerzyanov – an 11th-hour addition to the field with GRX-SET – Juha Rytkönen, who made such an impression on home soil at Kouvola last year returns behind the wheel of a Ford Fiesta, whilst double DTM champion Timo Scheider, will spearhead a three-strong ALL-INKL.COM Münnich Motorsport assault.

The release of today's entry list marks the beginning of a new era under the stewardship of Rallycross Promoter GmbH, and also the end of the era, as Andreas Bakkerud will not return as a permanent entrant in 2021. The Norweigan has been a permanent entrant since the championship's inception back in 2014. 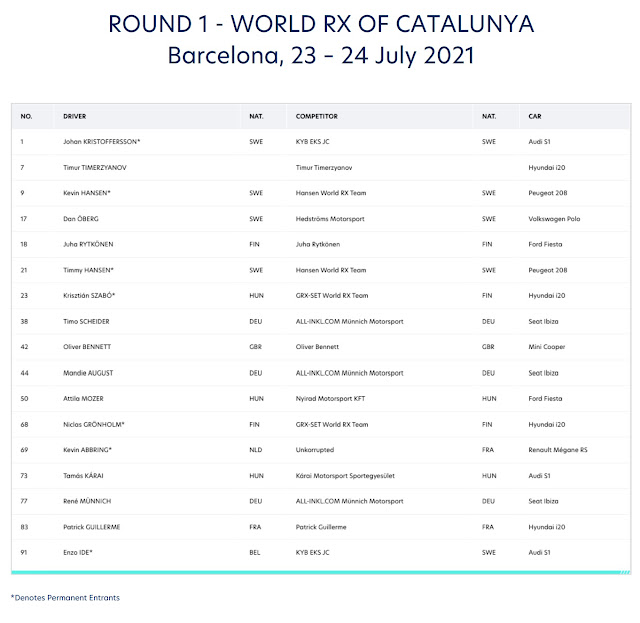 Posted by Junaid Samodien at 14:25