Formu1a.uno - The Scuderia Ferrari SF21 is not a car for all track conditions.

Fingers seem to be pointing at the operating window of the tyres (especially the fronts) but it does not explain everything.

The SF21 from testing showed its strengths and its weaknesses, we could not hope to totally overturn what we saw in 2020 but the signs were mostly encouraging.

The Italian car is not fantastic, but not as bad, as seen with pole position in Monaco and Baku, but neither is the car seen in France.

"I don't think the French GP reflects the true pace of the car or the performance itself, but it's something we have to learn and tackle, not in the immediate future but in the medium and long term," Binotto said a few hours after the GP.

Paul Ricard recalled that there is still a lot of work to be done, even on management errors and strategies that remain alive, although they have taken steps forward in a few areas compared to previous years.

An example is Leclerc's second stop, to put him back in the midst of Hamilton and Verstappen: it was no longer useful to leave him out also to check the return of performance that Charles was signaling even with a bit of amazement? 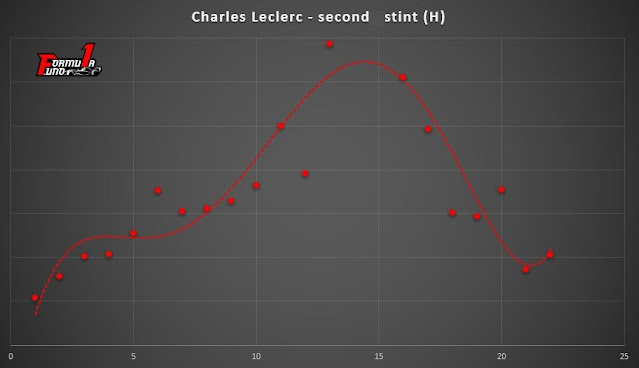 For what seemed like a real return to life of the front tyres that were finally clearing the massive graining. The Monegasque after a horrible pace also on 1m41s (lap times), after 20 laps, had dropped to 1m39s.

It could have been interesting to get further feedback on the car's behavior, why - like in Baku but to a much worse extent - the tyres started to work decently after too long and when the tread is fewer millimeters thick.

The explanations must be sought as in Portimão on the slipperiness of the track. With the difference that in Portugal it depended purely on the asphalt while in France on Sunday the conditions with rain in the previous hours made the track 'green' and slippery.

For the SF21, having sufficient grip on track is crucial. Which is the important difference between Paul Ricard and Barcelona, where Ferrari was the third force in the lot rather calmly.

Then it is clear that the SF21 needs low speed to pull and behave better than the opponents, at least the direct ones. Agility is one of its great characteristics which however goes out in the wide radius turns.

Furthermore, it cannot be a coincidence that both in the Algarve and in France, Sainz expressed himself better than Leclerc in qualifying.

Unlike Leclerc, we noted from Bahrain - and then better at Imola - how Carlos always prefers to enter the corners strongly and pay more at the exit.

A matter of style, confidence, and consistency. The prolonged corners favor this attitude because the car is in a 'continuous insertion'. The more the corner is shorter or even in the 'variants', the more Leclerc seems to make a difference with his 'V' shaped cornering style.

It is a positive difference because there is compensation between the two which can improve their respective skills.

Nevertheless, in qualifying, the performance always shows something positive, why?

First of all, why it is better to have speed than to be covered and stable. Certain aspects, such as the rims Binotto talked about at the end of the weekend, can not be improved, but it must be considered that with a more rubberized track we would have seen a more close battle with McLaren. What Ferrari expected. Certainly not the ease (4 tenths) with which we were ahead of the MCL35M in qualifying.

"We know that in terms of race pace we are not yet where we would like to be: we will prepare as best we can and we will continue to do so in the coming weeks to give our drivers an increasingly competitive package." Laurent Mekies had stated in the post qualification.

The grip reset has revealed that the SF21 is not a car for all conditions.

On several occasions so far we have seen a car immediately ready to extract times, except in Portimão and Paul Ricard.

In Maranello, in preparation for the French weekend, we worked almost exclusively to improve what had not worked in Azerbaijan, namely the 'race pace'.

We arrived on the track with too much race-oriented set-up. The two free practices on Friday made it clear that it was difficult to extract the right performance on a flying lap. It took several laps to find the performance, which then came. Not a problem on Fridays, certainly on Saturdays.

Hence the choice, for FP3s, to go with a more aggressive setting (more exhaust), which would make the SF21 slip more, turning on the tyres faster and consequently extracting greater performance.

It was actually like this, even if Leclerc immediately noticed those annoying understeer problems that did not promise anything good for Sunday's race (and that did not disappear even by continuing to 'click' on the front wing). In qualifying, in fact, a more oversteer-oriented set-up is usually chosen in order to have it more neutral in the race.

The understeer was then exasperated on Sunday by asphalt with very little grip and very minor lateral forces in the race that do not help to warm the tyres, especially the fronts which are obviously not stressed by traction efforts like the rears.

“The race pace was not a problem in Barcelona. However, it is clear that we have a very narrow working window on our front tyres, so we tend to fight a lot more than our competitors when there are conditions where graining can form or when front wear is greater,” Carlos Sainz said in the post GP interviews.

In hindsight, a heavier downforce set-up would have been more useful to push the tyres and not slip too much. Alpine and McLaren are proof of this.

But it must also be said that Ferrari did not expect so much rain before the GP. A thermal lowering yes, which would also have helped (the rear), a reset so important in the grip of the track but no.

Even making an aerodynamic match on Friday could have provided some more data, even though the track worsened significantly between Saturday and Sunday.

On the most positive occasions in the race, the SF21 was in better shape than McLaren but it did not materialize as correctly as it could. The difference in points must be sought there more than in Sunday's disaster.

Due to the characteristics of the car, other negative events should not be surprising.

In Austria, weather uncertainties permitting, it will again count more to have good traction from low and medium-low speeds such as the exit from Turns 3 and 4 above all. It is not a track in itself tiring on tyres, at least in the first round where Pirelli will bring the C2, C3, and C4 compounds. In the second, however, it will move to C3, C4, and C5, therefore a softer degree as a selection.

"Spielberg is a different circuit, a track where the differences in qualifying are very small. I think it's a better track for us than Paul Ricard," Mattia Binotto, Team Principal of the Italian team said in the post-weekend briefing.

"We will not be as competitive as in Monaco or Baku, but we think that a better performance than the one in France is feasible," he added.

According to what Formu1a.uno has learned, Binotto will be absent in Styria while he will return to the second round of the Red Bull Ring the following week.

Article Written By: Giuliano Duchessa and Piergiuseppe Donadoni from Formu1a.uno

Posted by Junaid Samodien at 13:55