“I still can’t believe that I have practised for this moment 64 times, it feels unbelievable,” he said. “This is my life. Every day I wake up in the morning and I only think about rallycross. It’s in my blood."

The Russian was nothing short of spectacular at the World RX of Benelux pulling off stunning airborne passes over the jump and daring overtakes in the qualifying sessions.

Timerzyanov was strong all weekend and progressed to the final, and began to set his plan in place.

“In the final, I was planning to just hold the guys behind and then at the first corner everything opened up for me," said Timerzyanov. "I saw a gap and I thought ‘this is my chance’ and I took it."

“I really didn’t know what to do when I was leading. It’s the first time I have been there in a final. I just tried to concentrate on my race and control my driving.

Timerzyanov would start the final on the second row of the grid behind Andreas Bakkerud and GRX Taneco teammate Joni Wiman. The Russian had a good start, while Bakkerud and Wiman lead into turn one, they ran wide opening the door to Timerzyanov who slipped through on the inside took the lead of the race.

Heading up Eau Rouge, behind Bakkerud and Wiman, Doran drove into the back of Baumanis and clipping the rear of his Monster Energy RX Cartel teammate pushing him wide at the Radillon hairpin.

Timmy Hansen took a early joker lap strategy, and Wiman was able to increase his pace in clean air emerging ahead of the Swede. He quickly caught Baumanis and cleared him after the Latvian driver took the joker two laps later.

Baumanis and Hansen were left to scrap it out and the Swede eventually coming out on top to finish fourth.

Timerzyanov began to up his pace and started to streak away from the field. Bakkerud tried an alternative strategy by taking an earlier joker lap in hope of closing the gap to the Russian, but the strategy did not pay off. There was a slight glimmer of hope for Bakkerud when Timur ran wide and lost momentum, but he was able to hang on and cross the line first.

Wiman on the other hand had the same strategy as Timerzyanov and jokered on the last lap coming within meters of claiming second place. But it was not to be for the Finn, he finished in third place.

Timmy Hansen finished fourth ahead of Baumanis, while Doran was also able to finish the race, despite an incident on the opening lap at the Radillon hairpin and finished sixth.

Missing out on his first win of the season Bakkerud followed up his third place in Barcelona with another strong weekend in Belgium.

“Argentina 2016 was my last win and I had one little finger on the trophy but if there was one guy who I would want to win this weekend if it wasn’t me, it’s my good friend Timur,” he said. “Of course I would have loved the win but he really deserved it. He is a true character of the sport."

Bakkerud explains the start of the final: “My race was OK but I overshot the first turn with Joni (Wiman) and went wide, then I saw Timur’s yellow rocket coming through and that was the end of the story."

“After a bad start in Abu Dhabi, two podiums in a row feels good. We are finally winning some qualifying heats. We need to take it step by step. We started late getting the RX Cartel together but now we’ve found a much more organised way of working and I’m sure things will continue to improve for us.”

Third place finisher Joni Wiman was drafted in as a late replacement to score teams’ points for GRX in the third Hyundai i20 in place of Niclas Gronholm, who was recovering from appendicitis.

Wiman was a revelation of the weekend in only his second World RX event, his last being four years ago. The Finn put in strong performance winning qualifying races and the semi-finals to book a place on the front row of the grid.

“This is my second ever world championship event and to get to the podium is a great feeling,” he said. “I started the weekend quite slowly but went flat out today."

"After the semi-final win I was quite confident that I could be competitive in the final. I tried to go for the win in the first corner but I got stuck in the wall for a while and I was lucky to recover. A first and third for the team is really nice.”

On his World RX return, Mattias Ekstrom battled his way to the semi-final. However, a coming together with Timmy Hansen at turn one in the second semi-final dropped him to the rear of the field.

Despite missing the final, Kevin Hansen maintains his championship lead. He is on 69 points with a nine-point buffer to his brother Timmy. While Timerzyanov’s win moves him to third place on 53 points in the drivers' standings. 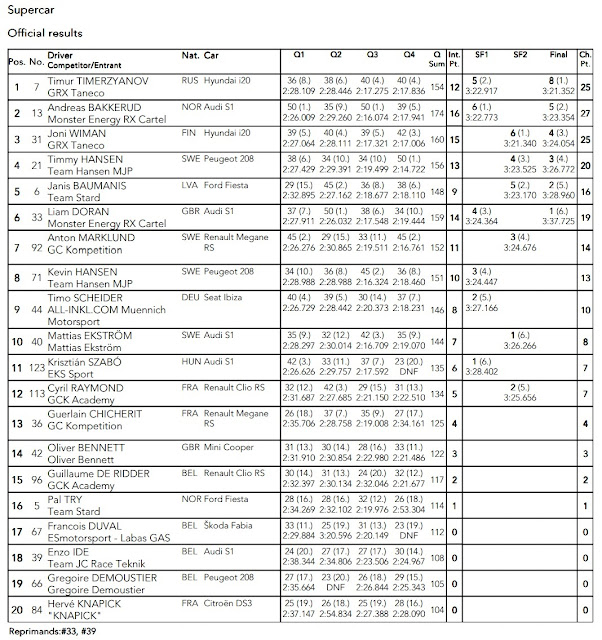