The FIA World Rallycross Championship will return to action at one of the most iconic tracks next month - the legendary Circuit de Spa-Francorchamps on 8-10 October 2021.

Nestled in the Ardennes forest, Spa-Francorchamps joined the World Championship calendar two years ago and was an instant hit amongst drivers and fans alike. After a year away due to the COVID-19 pandemic, it returns in two weeks' time, with the World RX of Spa-Francorchamps marking the sixth of nine rounds this season.

The World RX title fight will click into high gear, with the Hansen brothers Timmy and Kevin currently leading the way from KYB EKS JC's Johan Kristoffersson who clinched his first win of the season in Latvia.

GRX-SET’s Niclas Grönholm has also climbed up the standings after victory at the World RX of Riga (Round 4), as his teammate Krisztian Szabo looks to turn his fortunes around after a string of fourth and fifth-place finishes.

Kevin Abbring (UNKORRUPTED), who hails from Son en Breugel, is barely 150km away across the Dutch border.

Having shown a strong turn of form in Latvia earlier this month, ALL-INKL Munnich Motorsport's Timo Scheider has set his sights on the trophy next time out.

Juha Rytkönen will try to replicate his final appearance from Sweden last month, while Ollie O’Donovan and Hervé Knapick make their second appearance this season, and Anton Marklund will make his season debut this year after setting the pace on the European stage at Höljes. 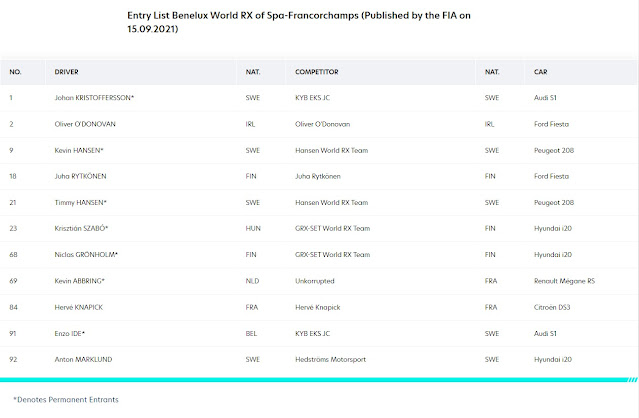 Posted by Junaid Samodien at 18:20