Grönholm fights back to win first round of Riga double-header.

Niclas Grönholm fought back to take a commanding victory at round four of the FIA World Rallycross Championship despite a first-corner collision in Latvia earlier today.

After a challenging start to the season thus far, Grönholm's season has finally taken a turn for the better.

The Hyundai driver lined up alongside top qualifier Johan Kristoffersson in the final. With the pressure mounting, lights went out, and on the run into the first corner of the final, Kristoffersson and Grönholm had a door-to-door battle, as the Swede hoped onto the brakes later into the first corner and with some contact, Johan was rotated and slid backward into the outside barrier.

He led from the first corner with second-row start Timo Scheider climbing to second with Krisztian Szabo and the Hansen brothers behind. However, Scheider's second place was short-lived due to an electric issue that switched off his in Seat Ibiza after landing from the big jump.

Scheider was able to complete a second lap but later retired.

Fourth through the first corner, Timmy Hansen opted for a first lap joker, which would later gain him track position over Krisztian Szabo and his younger brother Kevin Hansen when they took their respective joker laps.

Hansen's younger brother, Kevin had a tight battle with Szabo at the joker merge, but with his foot pinned to the gas. He was able to gain third on track, whilst Grönholm pulled out a healthy lead to take his joker rather comfortably and claim his fourth career victory, with the Hansen brothers rounding out the podium, despite a challenging first round in Riga.

"It was a tough start to the season with two really bad races," Niclas Grönholm said. "France was a step towards something better, and we had good pace just a bit of luck that turned. It was a tough day but in the end quite a good one."

The 25-year-old Finn admits that he was a bit nervous about the first corner collision with Johan Kristoffersson.

"I was a bit nervous because you always look at things a bit differently. I saw it as a racing incident. We both braked late, he braked a bit later than me and our wheels touched," he said. "I have no reason to take him out on purpose. It was just something that happened. I was a bit nervous coming over the line because I knew there would be an investigation, but now I'm happy." 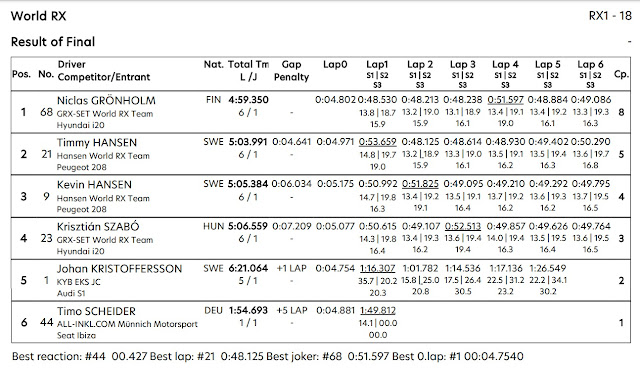