Kristoffersson gets World RX title bid back on track with victory in Latvia.

Johan Kristoffersson has got his World RX title hopes back on track this weekend, as he claimed his first victory of the 2021 campaign on day two of the double-header weekend in Latvia.

The three-time World Champion might have had a day to forget on Saturday afternoon, but with some overnight fine tunning his KYB EKS JC squad were able to unlock some speed, and that was seen straight from the morning warm-up.

But come qualifying, it was Mattias Ekström who topped Q1 with Niclas Grönholm dominating Q2, Q3, with Timmy Hansen and Timo Scheider earning a place in the semi-final, as Johan led home the second semi-final ahead of Ekström and Kevin Hansen.

The scene was set... Could Grönholm do the double? Or would we see a first-time winner? Well, before the final got underway, All-Inkl Munnich Motorsport's Timo Scheider entered the tyre warm-up zone, which ended with prop-shaft failure.

Having failed to start the final, Krisztián Szabó entered the fray alongside Kevin Hansen on the third row of the grid (for the final).

The GRX-SET driver certainly had the pace and had great launches (starts) throughout the weekend certainly made him a favorite, but with Kristoffersson alongside on the front row, anything could possibly happen. Let the games begin!

Kristoffersson had a dream start and was a car length clear of Grönholm before turn one with Niclas coming out second best with Timmy Hansen in third followed by Szabo and Kevin Hansen fighting for position behind.

On lap five, the Flying Finn tried an alternative strategy (took joker lap) but it was not enough, as Kristoffersson put his foot down, and with a final joker lap, he went on to claim his 25th career victory and his fourth on the Biķernieku trase (track).

"I had a very good start. I had a steering lock up and I had to shift the gears there was a lot going on. The guys (team) really deserve this victory because as they have been working very, very hard," Kristoffersson said.

Having taken the top qualifiers spot earlier this afternoon, Niclas admitted that he did not have it within him to win in Latvia today.

"I really didn't have the best launch in the final, and then I tried to follow Johan as best as possible. I think I managed pretty well, but I just didn't have it in me to win it," Grönholm said. "In the final, it was just not quite enough. I think Johan saved his best tyres for the semi-final and final."

The 2021 FIA World Rallycross Championship now moves on to the World RX of Spa-Francorchamps from October 9-10. 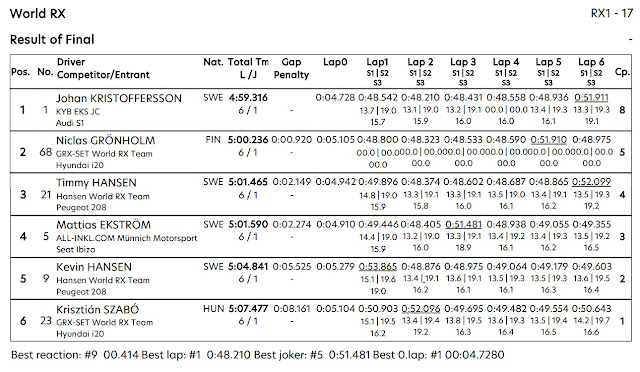 Posted by Junaid Samodien at 21:02