The 2019 FIA World Rallycross Championship title fight takes centre stage at the penultimate round at the Neste World RX of Latvia this weekend.

Andreas Bakkerud rose to the top of the standings at the previous round in Loheac, France. The Norwegian holds a two-point lead over the Hansen brothers Timmy and Kevin, who are tied on 158 points.

The 2019 championship has proven to be one of the most closely-fought seasons ever with six different winners from the eight rounds to date. Only Timmy Hansen is a multiple race winner this year.

With two rounds remaining, all three of the leading protagonists could claim the title.

"I’ve brought Mattias (Ekstrom) with me to be my personal coach to help me go faster," he said. "Hopefully that can make a difference. The start line in Riga is very slippery which makes it very tough to hit the right rpm and make consistently good starts so we’ll focus on that."

Bakkerud admits he will have his work cut out this weekend as Latvia is not one of his strong tracks. "Riga has never been my strongest World RX event on the calendar, but I’ve always been a huge fan of going there," he said. "This year I hope I can go faster at the racetrack itself."

As for Timmy Hansen, Riga is a favourite track and the Swede believes his Peugeot 208 will be suited to the track layout. "I like the circuit and the car has a good record there. I hope we have a good chance this weekend," he said.

"It's a great track for our car. Seb (Loeb) won here back in 2016 and we have always been fast here. Of course I hope to win again this weekend. I will focus on finding a good rhythm on the track to get 100 per cent out of myself all the way from Q1 to the final."

As for the championship, Timmy targets a strong weekend in Riga which will keep him in the title fight. "The championship is very close, so it will take a great weekend to stay in the fight. That's really all I'm thinking about right now, to drive a good race in Riga."

Kevin Hansen sees the technical characteristics of the Riga track as a major challenge and is mindful of the forecast for rain this weekend. "Riga is a tight and technical track, which is quite fun and complex: you could call it our Monaco Grand Prix," he said.

"It’s important to take a very precise line and look after the tyres carefully: in other words not too much sliding with the throttle wide open. The main thing is to make sure that you’re spending more time moving forwards than moving sideways.

“What’s going to make it particularly complicated this weekend is that we’re expecting quite a lot of rain, so it’s going to be even more important than usual to keep everything clean and tidy. It’s a nice day today, so it seems quite hard to believe, but it’s fairly common in Riga to have mixed conditions, so we need to be prepared for everything."

Latvian hope rests with Team STARD’s Janis Baumanis and Reinis Nitiss, who drives one of three Hyundai i20 Supercars for GRX Taneco alongside the Niclas Gronholm and Timur Timerzyanov.

Baumanis’ consistent performances this season has propelled him to fifth in the standings on 120 points. He has appeared in five finals and reached the podium twice – third in Norway and second in Canada.

"After a year we are back in Riga, one of the most important – and the most stressful events on the calendar for me," he said. "The atmosphere is fantastic and makes it very special for me and my fans."

"This will be the fourth year in Riga so obviously everyone knows the track by now. I hope to do my best for the home fans. I can’t wait for Saturday morning to get going."

Nitiss has fond memories of clinching the Euro RX title at this venue last year. "Home events are always more challenging – you have all your friends and fans in grandstands cheering for you, so naturally the pressure grows," he said.

"Bikernieki is an iconic, old-school motorsport complex with so much racing history. For me the relatively new rallycross track has a special meaning – I have been involved in the making of the circuit and was one of the very first drivers to try it out even before it was fully completed.

"With a limited racing programme this year, the stakes are high – but I know that together with the GRX team I have the speed. It’s proven by the fastest lap in Abu Dhabi and the podium finish in Sweden.

"To succeed in my home race, I will need to focus even more, prepare even more and be calmer than ever, not to overdo it, but to keep my head straight and aim for the best result."

Gronholm, fourth in the standings on 135 points despite missing two rounds this year through appendicitis, finished fourth in last year’s Riga final, his best result of the season.

"Once again, we showed great pace in Loheac, especially on Sunday when we were really up there, but the final didn’t go our way. Last year here was my best race of the year, so I think we can expect a good race for us," Gronholm said.

Another incentive for GRX Taneco is the teams’ title, according to team manager Jussi Pinomaki. "The fight for P1 in Teams’ championship is still wide open and we will focus on every detail to succeed in this race," he said.

There is added spice to the weekend with comments by Timo Scheider after the previous round in France. At the centre of the German’s ire was Rokas Baciuska, who reached his first World RX final at Loheac.

Scheider was aggrieved by the GC Kompetition driver’s aggression in their semi-final, claiming the contact he had with the Renault Megane cost him a place in the final.

The German was mighty with his launches in Loheac – recording a reaction time off the line of 0.75. He was P3 overnight after day one and P6 overall after Q4 but the contact with Baciuska in the semi-final ended his participation for the weekend.

Scheider heads to Riga in an upgraded Seat Ibiza which he believes is now capable of mixing it with the front-runners.

"The Bikernieki track was where I had my first test with the GCK Megane RS RX after the race weekend last year," Marklund said. "Hopefully we can bring the good momentum from the last races in to this round."

Guerlain Chicherit is seeking a strong all-round performance from GCK in Latvia. "With Latvia RX the last race in Europe of the FIA World Rallycross Championship calendar, I’m really looking forward to bringing the team of five cars and drivers to the Latvian crowd and race in front of all the fans before heading to South Africa," he said. "We look to continue to up our performance from the last races and bag strong points for GCK."

GCK Academy’s Cyril Raymond is focussed on the Bikernieki tracks technical challenges. "Latvia RX is one of the hardest circuits in the calendar for me. The track is really picturesque especially when you are driving in the forest but very technical. Our Clio will be more efficient on this type of track," he said.

His team-mate Guillaume De Ridder goes in search of a long-overdue change of fortune as does Britain’s Oliver Bennett who has completed repairs on the Xite Racing Mini Cooper after an off in Q4 at Loheac.

2019 FIA European Rallycross Champion Robin Larsson joins the World RX grid in Latvia. The Swede will be at the wheel of a JC Raceteknik Audi S1.

"It will be exciting to see how we stand against the World RX guys now. I think you can raise your own level, even more, when you are fighting to keep up, so maybe we can close the gap more too," he adds. "The goal is to at least make the semi-finals, and use this as a good event to check our pace."

Russian Matvey Furazhkin returns with ES Motorsport – Labas GAS in the Skoda Fabia following his World RX debut at Loheac the previous round.

"The weekend in Loheac was one of the best of my career," he said. "The level of racing was impressive. The car felt really competitive and working with such a professional team is very motivating."

"Now we are preparing for the Riga event and the main goal for this race will be to improve results from the previous race weekend. I can’t wait to be in the car again and push the limits."

Paul Try will start his third event of the season with Team STARD alongside Janis Baumanis. 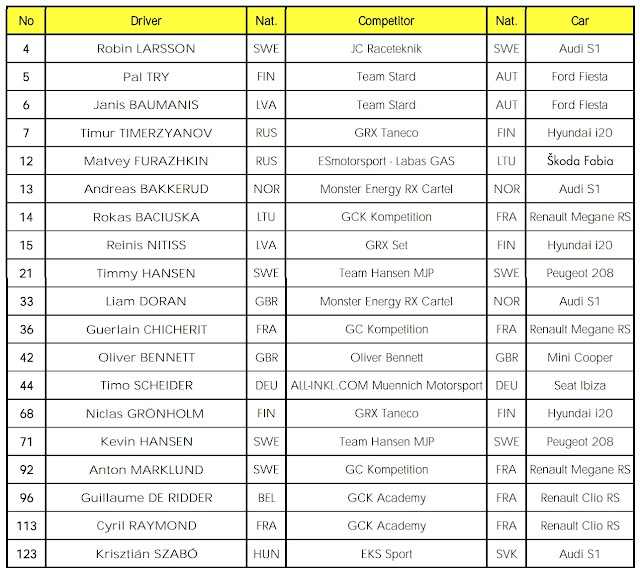 Posted by Junaid Samodien at 17:09