Three for the price of one as GC Kompetition increases World RX presence. 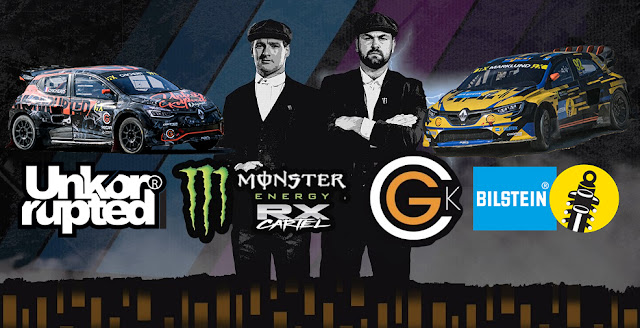 GC Kompetition is back, and bolder than ever. Three new teams with one objective to win the FIA World Rallycross Championship.
GCK are renowned for “changing the rules” wherever they go, and this season it will be no different.

The French squad will field five permanent entries and a part-time entry for Kevin Abbring at selected events. Swede Anton Marklund will return in a Renault Mégane R.S. RX, whilst two of the biggest names in rallycross, Andreas Bakkerud and Liam Doran will trade their hired EKS Audi S1’s for a pair of Mégane R.S. RX supercars this season.

Will Guerlain Chicherit (GCK team owner) return this season? Of course! The Frenchman has made the biggest change this season switching from the longer wheelbase Renault Mégane to the slightly shorter Renault Clio R.S. RX, and joining Guerlain on the grid in the newly formed “UNKORRUPTED” squad is Rokas Baciuška.

The name at first makes you wonder, why they chose the name "UNKORRUPTED". Because uncorrupted in the English dictionary means: “not subjected to corruption” or “free from moral corruption,” which has no actual link to the team. But with their aim to push the boundaries and disrupt the World RX order you could draw a parallel with the word “unkorrupted”.

UNKORRUPTED will field a pair of Renault Clio R.S. RX that have undergone massive developments in the offseason, including a new engine update from ORECA, new BOS dampers, and significant work on weight distribution.

GC Kompetition was founded by former freeskiing Champion and motorsport athlete Guerlain Chicherit in 2017. While GCK only entered the FIA World Rallycross stage in 2018 finishing the season in 5th place in the teams’ standings. In 2019, the team expanded into two teams, the main team being GC Kompetition with Chicherit and Marklund, and another team for up and coming talent under the banner "GCK Academy" with a pair of Renault Clios.

In the compact 2020 season Guerlain will switch to the Renault Clio alongside Rokas Baciuška who had a limited World RX programme in 2019 after entering the championship with ES Motorsport, and later joining GCK as an independent entry. The 20-year-old Lithuanian claimed his best result in Loheac last year with a fourth-place finish.

Joining GC Kompetition in the second half of the 2018 season, Anton Marklund showed his trust in the team by committing to be a key part in the development of the Mégane R.S. RX. The Swede returned in 2019 for the full season, and crossed the line first in Norway, but was later disqualified for a technical infringement. A few rounds later, Marklund claimed GC Kompetition’s best ever result with a second-place finish at Loheac, France.

This year Marklund will return as an independent entrant with “GCK Bilstein” with the sole focus of challenging for the Drivers’ World Title in a Renault Mégane R.S. RX.

The Mégane R.S. RX that Marklund hopes will propel him to the top of the standings has undergone additional developments on the engine and a new evolution of the Bilstein dampers for the 2020 campaign.

The Monster Energy RX Cartel took the World Rallycross stage by storm when they launched early last season with the objective of being fast on track and disruptive in the paddock. They certainly ruffled a few feathers along the way.

While the 2019 season went all the way to the checkered flag in Cape Town, Andreas Bakkerud came out as the runner-up finishing on equal points to the World RX Champion Timmy Hansen, only to be split by the number of victories in the season which ultimately decided who would be the World Champion.

This season, Andreas Bakkerud and Liam Doran have traded in their Audi S1 Supercars for a pair of GCK prepared Renault Mégane R.S. RX. Doran will return to machinery he knows quite well having driven the Mégane at three rounds in the 2018 World RX season. But, with their combined experience Andreas and Liam will undoubtedly be the ones to watch this season.

We can not wait to see these three teams juke it out for victories in 2020! Bring it on!