Everything you need to know about World Rallycross and more.

The FIA World Rallycross Championship heads to Cape Town, South Africa for the season finale on 24 - 25 November 2018 at the Killarney International Raceway.

World RX is one of motorsport's most action packed series, combining the world of rallying with circuit racing.

Guess what??? World RX Supercars can accelerate from 0-60mph in less than two seconds – faster than a Formula 1 car. Does that grab your attention? It should!

If you want to see fast cars and the best-of-the-best in the World Rallycross championship head to Cape Town to see the season finale.

So, how much do you really know about the 'RALLYCROSS' that actually started in 1967? Want to learn more about the incredible series? Sure thing....

What is rallycross?
Rallycross is a combination of rallying and circuit racing, and takes place on mixed surface, of asphalt and dirt.

The tracks are laid out in a way that fans can see as much action as possible.

The cars are like no other.... Each driver is equipped with RX Supercars with over 600bhp, four-wheel drive, turbo charged and cars that can accelerate from 0-60mph in less than two seconds.

Each World RX event is made up of an open practice session, four timed qualifying heats, two knock out Semi-Finals and one Final. There are four qualifying heats with a maximum of five RX Supercars starting abreast in each race over four laps.

Where and when did Rallycross start?
Rallycross began in 1967, when Robert Reed, a producer on ITV's World of Sport invited a group of rally drivers to a race at the Lydden Hill Circuit in UK, on 4 February that year.

After four qualifying heats, 12 drivers with the most points move into the semi-finals. This round [semi-finals] features two races, with six cars in each racing over six laps. The top three in each semi-final qualify for a six-car final that consists of six laps.

So, is it that simple? Let's add a twist... The likes of, let's say... A JOKER LAP. The Joker Lap is an additional section of track that each driver must complete once during each race or face a time penalty of 30 seconds.

Each driver is also allowed to use eight tyres of each compound (wet and dry) per round.

You have now learnt more about the FIA World Rallycross championship, but in case the history is not enough to grab your interest, here are FIVE reasons why you should get your tickets to attend the season finale in Cape Town…

The Speed:
World RX Supercars are capable of accelerating from 0-60mph in 1.9 seconds. The Supercar class boasts some of the fastest beasts in motorsport.

The Power:
A World RX Supercar pushes out roughly 600bhp [447kw] and 900nm of torque, with a five or six-speed sequential gearbox and a minimal weight of 1300kg (including driver). True beasts, don't you think?

The Noise and Jumps:
When five-to-six World RX Supercars are lined up and are ready to go racing with anti lag and launch control engaged. The sound is like music to any petrolhead [Its loud!].

What makes World Rallycross unique, is the integration of jumps into the track design, which in turn makes the racing incredible and seeing a RX Supercars fly is incredible!

The Action Packed Racing:
In a race that lasts four minutes or more, it is filled with thrills and spills. The drivers go for any gap and often get the moves done! Rubbing is racing in World Rallycross, but drivers are not allowed to wreck one another, although contact does happens in each race and some drivers may come out worse then others. Let's go racing!

Last season Johan Kristoffersson, Petter Solberg, and PSRX Volkswagen Team Sweden did the unthinkable, and claimed both championship titles in their debut season as a team.

If that was unthinkable... Guess what? In 2018, the PSRX Volkwagen Sweden team claimed their second teams title and the 2017 champion Johan Kristoffersson successfully defended his crown.

So, who will be racing at the 2018 Gumtree World Rallycross of South Africa? If you did not know, now you do.. Because you will find the entry list below! 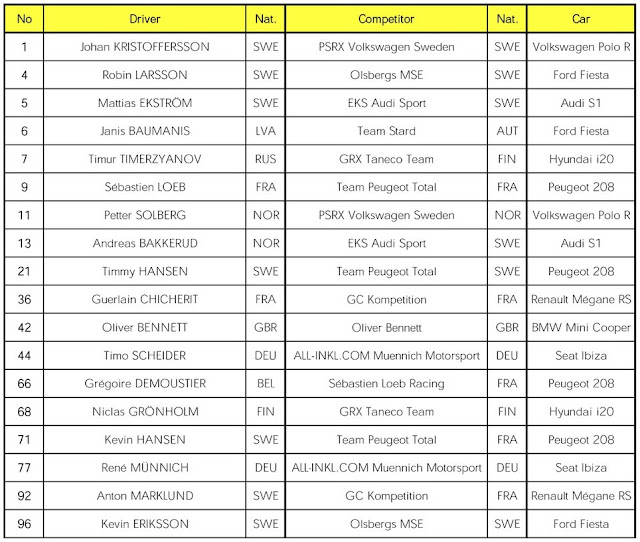 Have you seen the homologated FIA World Rallycross track at the Killarney International Raceway? No! Well take a look at the track below, including some statistics from the inaugural event in 2017. 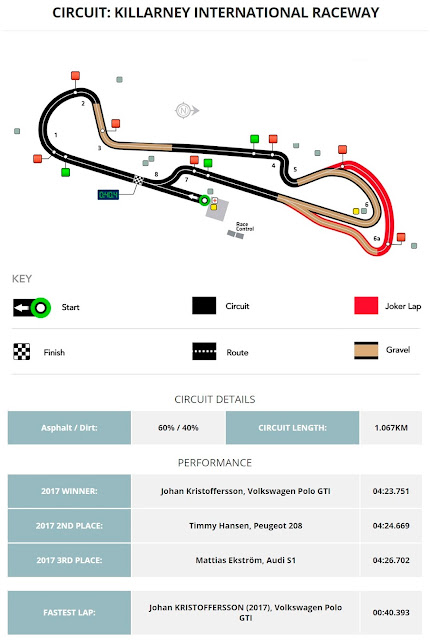