The FIA World Rallycross Championship will celebrate it's tenth season, with the series’ freshly-unveiled calendar featuring iconic venues, an intriguing new addition and the return of some old favourites including the fabled birthplace of the sport.

The ten-round 2023 calendar will see action get underway at Hell in Norway in mid-June, before moving to arguably the discipline’s most famous circuit – Höljes in Sweden – for the legendary ‘Magic Weekend’ at the beginning of July, which will mark World RX’s 100th round.

Three weeks later, the championship will return to Britain for the first time since 2019, with a summer sojourn to Lydden Hill, where rallycross was born more than half-a-century ago.

Classic Belgian track Mettet – is up next, followed by ever-popular Montalegre track, whose revised layout in 2022 generated some of the most spectacular racing of the season.

The final European stop on the schedule will be the Estering (Germany) in September. The characterful track has been absent from the calendar since 2018, and was the scene of one of the most memorable moments in World RX history, when Kevin Eriksson famously ‘sent it’ all the way around the outside and into the lead at the first corner on his way to victory in 2016.

Following the European leg of the season, the cars will be transported to Cape Town to do battle at Killarney International Raceway, in the shadow of Table Mountain. The last time the series set foot in South Africa, Timmy Hansen and Andreas Bakkerud thrilled fans with a sensational duel for the Drivers’ crown, which ended dramatic fashion, with Hansen ultimately coming out on top.

The season will conclude just over a month later at a yet-to-be-announced new venue in Asia, with details to follow.

"We are pleased to present the 2023 World RX calendar, which we believe represents the very best of rallycross and which has been the subject of a huge effort behind the scenes in recent months. It clearly looks slightly different to recent seasons, and we are delighted to finally be ‘spreading our wings’ and venturing outside of Europe again," Arne Dirks, Executive Director, Rallycross Promoter GmbH, said.

"Ever since taking over as promoter of this great championship, we have been committed to returning to Cape Town to showcase World RX in front of the enthusiastic South African fans, and we are hugely excited to be adding a new event in Asia to the line-up, which truly underscores the series’ World Championship credentials.

"At the same time, the re-introduction of three charismatic European venues in Lydden Hill, Mettet and Estering reflects our desire to celebrate rallycross’ rich heritage and traditions while embracing the sport’s electric future. Similarly, the large crowds seen at Hell, Höljes, Montalegre and Nyirád this year are testament to those circuits’ enduring appeal. We can’t wait to go racing!" 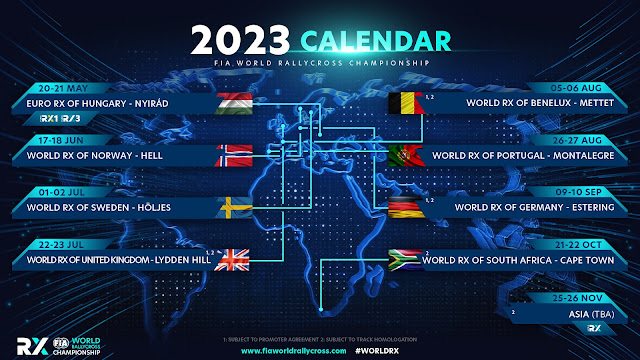 The WMSC has also announced a return to a more traditional racing format, with four heats for five cars maximum (where grids are decided by results of the previous heat), and semi-finals with six cars. This is a complete role reversal from the 2022 season, with Superpole being retained from the 2022 format.

Posted by Junaid Samodien at 19:31