PREVIEW: The title fight goes down to the wire in German double-header.

After seven rounds at six different circuits, the 2021 FIA World Rallycross Championship fight comes down to the wire - a double-header season finale with a thrilling five-way title battle for the honor of being crowned world champion at the legendary Nürburgring.
With 60-points up for grabs, there are five possible candidates who could clinch the title at the end of round 8. It will all come down to the execution of the perfect weekend and not making a single error as the smallest of issues could prove to be costly.
Timmy Hansen is the leading protagonist having not finished lower than fourth so far, the Swede is closing on a second drivers' title, but with 60 points available and just a 17-point advantage, it's all to play for in Germany.
Timmy's closest pursuer is three-time World Champion Kristoffersson - who hasn't had the best of luck finally had his championship hopes shifted into high gear when he claimed back-to-back wins in Latvia and Belgium. He has also topped more qualifying sessions than anybody else this season. If Swede has another clean weekend without any major dramas, he can overturn Hansen's lead.
Only 19-points shy of older brother Timmy - Kevin has been fairly consistent this season having won the season-opener in Barcelona, with a fifth-place in Riga as his worst this season.
Like Kristoffersson, Niclas Grönholm had to overcome a few difficult weekends to thrust himself into championship contention with victory in the Latvian double-header, which he then reinforced with another win at Montalegre (Portugal) after his three main rivals tripped over one another in their scrap for the win.
Grönholm's GRX-SET teammate Krisztián Szabó claimed his best result of the season in Belgium last month and is also mathematically in the hunt.
Having missed the Portuguese round (last month), Kevin Abbring returns with the UNKORRUPTED squad and will aim to continue his strong turn of form this season, whilst two-time FIA European Rallycross Champion Anton Marklund rejoins the fray after his previous World RX outing with Hedströms Motorsport at Spa-Francorchamps.
Euro RX3 Champion Yuri Belevskiy steps up to the premier class in a Volland Racing Audi S1, whilst former World RX racer Davy Jeanney makes a comeback after more than 3 years in a PGRX Hyundai.
Having competed in the Catalunya curtain-raiser earlier this year, Tamás Kárai returns, whilst Oliver O'Donovan returns for more action and Stefan Kristensson makes his debut in a team SKAAB prepared Ford Fiesta.
In addition to staging the title decider in Germany, this weekend will mark the final event of the World Championship’s internal combustion era, before the switch to electric power in 2022. Based around the Mullenbachsleife section of the famous Grand Prix circuit, the Nürburgring’s 1,029m rallycross track, which was officially launched in 2020.

The start line – the highest point of the rallycross track – is located at Turn 6 of the Grand Prix circuit, with a 90-degree right-hand corner to begin the lap. The start section is only used once, against the flow of the track, with the Turn 1 right-hander being a left-hander for the racing lap.

The rallycross track drops down steeply after Turn 2, transitioning from unsealed to sealed surfaces using part of the Grand Prix circuit’s asphalt, before a second unsealed section at Turn 3, with the Joker Lap section running around the outside of the Turn 4 left-hander.

The circuit has an elevation change of more than 15 meters over the course of the lap and gradients of up to 12%, with almost the whole track lined by grandstands to guarantee fans an unrivaled viewing experience. 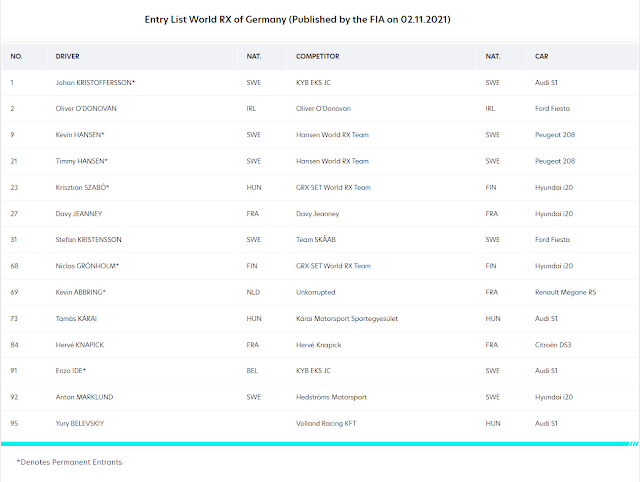 Round 8 and 9 World RX of Germany Schedule (CAT Times) - CET is one hour earlier.

Posted by Junaid Samodien at 16:01