Kristoffersson within touching distance of fourth-title, as title rival Hansen is disqualified in Germany.

Timmy Hansen's lead in the FIA World Rallycross drivers' championship has been cut to four points, as three-time World Champion Johan Kristoffersson reigns supreme in a tricky World RX of Germany - Round 8 on Saturday afternoon.

After overnight snow at the Nurburgring, conditions were quite treacherous, and that was seen when practice eventually got underway after a 30-minute delay. Driver's were slipping and sliding trying to find the ideal line, etc.

Whilst the Hansen brothers' topped the practice session, Kristoffersson was right behind ready to strike back.

Kristoffersson topped Q1 ahead of newcomer Yuri Belevskiy, with title rival Timmy Hansen in third after winning his respect heat, but the most worrying moment of the first qualifying session was when Herve Knapick's Citroen launched off a kerb on the entry to turn four, which launched his car into the trackside catch fence.

Race control later reported that Knapick was "okay" and was transported to the hospital for precautionary checks. No updates have been provided as yet [find the update on @JunaidSamodien_ on Twitter]

The FIA Stewards later announced the cancellation of Q3 due to time constraints meaning two qualifying sessions would dictate the top qualifying positions for the semi-final and final.

With a good start, Niclas Gronholm went on top Q2 ahead of Yuri Belevskiy and Johan Kristoffersson, with Timmy Hansen in fourth.

A quick turnaround saw the top 12 line-up on the grid for the semi-final.

The KYB EKS JC driver did not have the best start, as Gronholm led on the run to turn one, but outbroke himself and ran wide allowing Kristoffersson to slip past and take the lead. A position that he would remain to the checkered flag sealing pole position for the final.

The GRX-SET World RX duo Gronholm and Krisztian Szabo progressed to the final as well, as Guerlain Chicherit, title hopeful Kevin Hansen and Stefan Kristensson would go no further.

Having finished fourth after the two qualifying sessions, championship leader Timmy Hansen started alongside Yuri Belevskiy, and with a slightly better start, the Swede tried to capitalize on his speed into turn one but ran a touch wide, with Belevskiy sliding through to take the lead. From there, the debutant was untouchable winning semi-final 2 ahead of Timmy Hansen, Enzo Ide, Davy Jeanney, Anton Marklund, and Tamas Karai.

Timmy Hansen was later handed a five-second time penalty for contact with Ide, demoting him to the back row of the grid for the final.

The scene was set for a mouth-watering final (round eight), with Kristoffersson on pole and Yuri Belevskiy alongside him (in a recently purchased EKS Audi S1).

Could the RX3 Champion beat the reigning World RX Champion? It was time to find out!

Johan had a great start off the line, as Yuri bogged off the line. Starting from row two, Enzo Ide quickly jinked right to try and cover off Timmy Hansen who started behind on the last row.

Trying to capitalize on track position should Kristoffersson run wide, Gronholm slotted in behind the bumper of the Swede.

Belevskiy's poor start sent him backward, whilst Gronholm took a heavy hit from Enzo Ide launching his Hyundai i20 into the air, as the cars slowed for turn 1. But that was not all for the ice-cool Finn. He also had a slight nudge from Timmy Hansen who jumped on the side... the contact from both drivers send Niclas off at turn one rejoining in last.

With the drama behind, Belevskiy capitalized and slide up the inside of Hansen into turn 2. The latter tried fighting back up gave up the ghost following the debutant with Krisztian Szabo, Enzo Ide, and Niclas Gronholm behind.

On the run down to turn four, Enzo Ide pulled off the track with some sort of issue, but soon rejoined, as Krisztian Szabo immediately opted for a first-lap joker.

As Kristoffersson slowly began to draw clear from the pursuing Belevskiy, Timmy Hansen hung onto his bumper ready to pounce should he make an error. But, having seen that he was fractionally faster, Hansen ducked into the joker lap trying to gain an advantage.

Hansen emerged from the joker lap right behind Niclas Gronholm and ahead of Szabo who jokered on the first lap.

On a full push from lap 3, Kristoffersson was already 2.237s clear of second-place running Belevskiy, as Hansen continued his charge.

In a formation for at least two more laps... the KYB EKS JC driver continued to stretch an advantage over Belevskiy.

With just a joker lap to go for the top three runners: Kristoffersson, Belevskiy, and Gronholm. Would Timmy Hansen be able to gain a few places?

At the merge, Kristoffersson came out comfortably in the lead, but it was Timmy Hansen who just about came out ahead of Belevskiy to take second, with Krisztian Szabo in fourth followed by Niclas Gronholm and Enzo Ide (in fifth) at the checkered flag.

Kristoffersson describes the day, as "mentally tough" due to the delays and other drama behind the season.

"The day started with a lot of snow and I really enjoyed that. Such tricky conditions! Then I tried to adapt to a new track with snow, and no studded tyres. It was tricky but very eventful," Kristoffersson said.

"I didn't have the good starts today, but I managed to overtake Niclas [Gronholm] in the semi-final when he outbroke himself.

"The visibility in the final was very difficult with the low sun and I was out first. So, I can only imagine how it was for those behind me. Timmy coming from the back row to finish second is good. He is up for a fight tomorrow, so it's going to be a very eventful day."

A couple of minutes after the final, Gronholm was seen walking over to Timmy Hansen opening his door and voicing his dissatisfaction for what had happened at turn one.

The Stewards later announced an official investigation into the turn one incident involving Niclas Gronholm, Enzo Ide, and Timmy Hansen in the final, and after some deliberation. They disqualified both Timmy Hansen and Enzo Ide for "pushing and overtaking".

With the penalties awarded, Kristoffersson was the victor, whilst Yuri Belevskiy moved up a step to second with Krisztian Szabo to third. 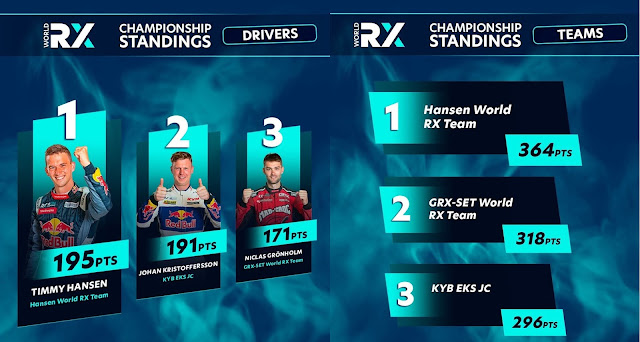 Having had a challenging opening half of the season due to punctures and technical issues, Johan Kristoffersson has taken a mighty leap towards clinching a four World title. He might be four points behind Timmy Hansen, but his performance today should that he was on a mission.
If Timmy Hansen hopes to win a second title, he would have to outperform a highly motivated Kristoffersson, and outperform him in nearly every area, as the slightest area will be costly.
Posted by Junaid Samodien at 19:53