The Swede had never competed around the challenging Spa-Francorchamps track prior to this weekend, but the KYB EKS JC driver did not let that hold him back. Second in the intermediate classification after the qualifying stages, he proceeded to win the semi-final before sprinting into the distance in the all-important final to cap off a close to perfect score that has carried him to just 12 points behind the championship leader (Timmy Hansen).

"This was a successful weekend and victory feels great. I think it suited us very well that they have turned the gravel at Spa into a harder surface because even if I hadn’t driven here before, I felt comfortable from the first practice. We had a very good Saturday but I didn’t get the best start in Q3, which meant we were not able to be top in qualifying," Kristoffersson said.

"In the semi-final and final we had incredible speed, the car really came to life and it felt really good. In the semis, I got off to a good start and was able to lead all the way, and in the final, we got an incredibly good start too. From there it was just a matter of taking the car to the finish. We are only 12 points behind Timmy [Hansen] now, that is good."

Kevin Hansen kept his own title aspirations on track with a solid run to second.

"The first couple of laps in our semi-final were hectic and it's really unfortunate that it turned out the way it did for a couple of guys. But this is rallycross – the luck can be both for and against you. We got through and were able to convert our front-row grid slot into a podium finish," Hansen said.

A delighted Krisztián Szabó claimed a maiden podium finish (a third place). The Hungarian has reached the final in every round to date this season and produced a defensive masterclass behind the wheel of his Hyundai i20 to keep Timmy Hansen, Enzo Ide, and Anton Marklund at bay right to the chequered flag.

"FINALLY! This feels good," Szabó said. "This weekend I was maybe not the fastest out there, but I was in the right place at the right time and you have to always be there in rallycross."

Championship leader Timmy Hansen won the first semi-final but was handed a 5 second time penalty for "pushing and overtaking"  at the hairpin which resulted in Top Qualifier Kevin Abbring hitting the barrier and finishing the semi-final dead last.

The Dutchman was in outstanding form and deserved better results, but he proved that both he and the UNKORRUPTED squad will be a force to be reckoned with over the remaining three rounds.

"I’m very happy with the weekend and the result. To make it to the final was always the goal for me, so to do it at home and to hear all of the Belgian fans in the stands was a wonderful feeling. My best rallycross memory was fourth place in Holjes, but now this is top of the list. It wouldn’t be possible without KYB EKS JC," Ide said.

Swede Anton Marklund made his rallycross return in the Hedströms Motorsport's run Hyundai i20, and clinched sixth place in Spa.

There was disappointment, however, for GRX-SET's Niclas Grönholm - who was forced wide at the start of the second semi-final.

"There was a lot of crashing and banging this weekend which is unfortunate but we just need to move forward. Now we go to Montalegre next week," Grönholm said. "That is a nice track, a proper old rallycross track which will be much nicer to go to, so I’m looking forward to that." 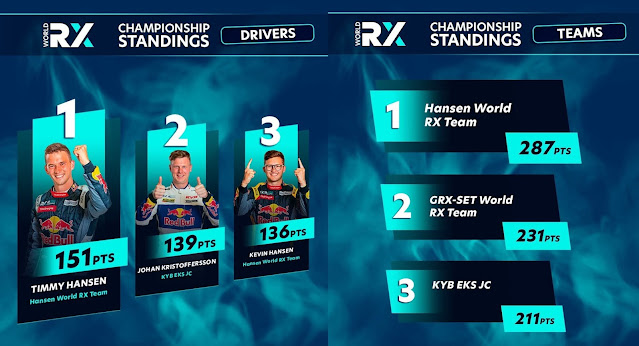 Posted by Junaid Samodien at 12:22