PREVIEW: The forests of Bikernieki will come alive to the sound of World RX.

After four thrilling rounds, the FIA World Rallycross Championship is back! This time around the action-packed championship heads to the Latvian capital, Riga for rounds five and six.

And, guess what? For the first time this season, spectators will be allowed to attend a World RX event, but in limited numbers though (a maximum 3000) with strict coronavirus control measures in place.

The start to the season was initially delayed by the COVID-19 pandemic but thus far four championships rounds have been completed across two venues; Holjes (Sweden) and Kouvola (Finland).

Returning double world champion Johan Kristoffersson has led from the front, and has established a healthy 17-point lead at the top of the championship standings, his closest rival being Mattias Ekstrom.

Ekstrom (the 2016 World Champion) has returned to the championship this year with KYB Team JC after Jānis Baumanis was hit by financial issues as a result of the COVID-19 pandemic. The Swede claimed victory at round two of the championship on home soil and has firmly cemented himself in championship contention (second-place overall).

Earlier this week, KYB Team JC announced that Ekstrom will return for the Latvian double-header alongside Robin Larsson who is currently sixth in the championship.

Finn Niclas Gronholm heads to Latvia with a good boost after winning his home round in Kouvola and currently holds third place in the drivers' standings. His teammate, Timur Timerzyanov who is currently in tenth-place, is hoping for better pace this weekend.

While reigning world champion Timmy Hansen has not had the start to the season that he had expected but hopes to take steps forward this weekend after three days of testing in Sweden. Timmy and younger brother Kevin Hansen are currently in fourth and fifth place in the standings.

Timo Scheider (ALL-INKL.COM Muennich Motorsport) claimed a third-place finish in Sweden (round 1) and is placed seventh after being in the final at three of the first four rounds. His teammate Rene Muennich has had a more difficult start to the year and is 16th after four rounds.

Andreas Bakkerud has also had a tough start to the season, but has made it to the final in rounds two and four and is eight in the standings, while his Monster Energy GCK RX Cartel teammate Liam Doran will be hoping for better fortunes in Latvia after suffering from a series of technical issues, which sees the Brit bringing up the rear in 21st place.

GCK Bilstein's Anton Marklund had a strong start to the season in Sweden, but faded away in Kouvola, claiming an 11th and 12th place finish, which sees him currently placed ninth, while the UNKORRUPTED pairing of Rokas Baciuska and Guerlain Chicherit will be aiming for stronger results in their newly developed Renault Clio R.S. RX supercars.

Jani Paasonen is back for more in his Ferratum Team’s Ford Fiesta as is Krisztian Szabo who raced in Sweden and holds 12th place in the standings with GRX SET. 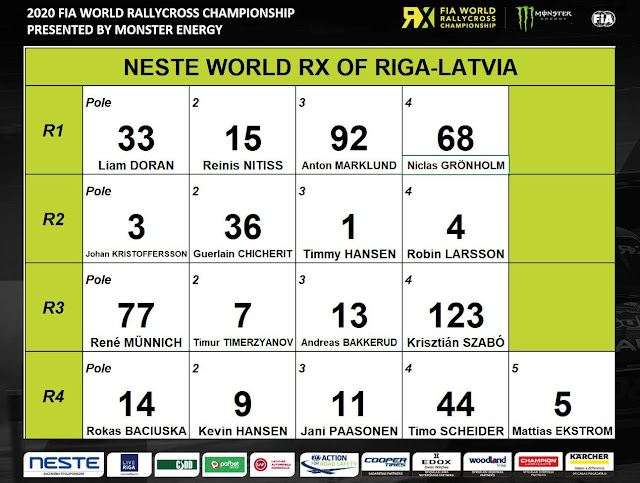 The World RX track is constructed within the historic race circuit that threads its way through the forest at Bikernieki. Created for the 2016 World RX in Riga – the first time the championship visited Latvia – the rallycross track is 1295m in length and consists of 60% unsealed and 40% asphalt surfaces, with a track record time of 48.485s. The track includes three jumps, two of them on the joker lap. Meanwhile, the joker and standard lap runs parallel to each other.

Turn Three: This fast, wide-radius left-hander requires pure commitment but also a bit of patience. A quick exit is crucial to avoid being overtaken on the long run to a hard braking zone at turn four but the wall on the exit has caught out several drivers in the last four years.

Turn Five: It's hard to make up time here, but it's very easy to lose it. This seemingly never-ending right-hander is one of the few gravel turns on the track and anyone who gets greedy with the throttle is likely to slide wide and leave the door open for anyone lurking behind them.

The Joker Merge: It's often elbows-out at Latvia's joker exit, which is located at the final corner of the lap. Drivers on a joker lap have the inside line for the corner, but those on the standard lap can take more speed out of the turn. That often leads to side-by-side jostling to the finish line in close races!

BROADCAST TIMES and SCHEDULE for Rounds 5 & 6 of the Neste World RX of Riga-Latvia (CET):

The livestreams for the events will be carried on the official World RX Facebook page and YouTube channel:

Posted by Junaid Samodien at 19:43