Johan Kristoffersson took his 23rd career victory of the FIA World Rallycross Championship in Riga-Latvia, after a well-executed tyre strategy.

Despite posting the fastest time in Q1, Kristoffersson used an alternate tyre strategy, which put in on the back foot against his rivals in Q3 (on new tyres). But the Swede would have the upperhand in the semi-final and final with five new tyres. He finished the three qualifying heats in second-place overall behind Niclas Gronholm (in the immediate classification) and rubber stamped a place in the semi-finals.

Semi-final one saw Mattias Ekstrom start on used tyres, but that was no disadvantage for the Swede, as he immediately sweeped around the outside and into the lead after a good start, and he would control the race all the way to the checkered flag.

While Johan Kristoffersson unleashed three new tyres (two on the front and one on the left rear). He had a superb launch off the line and led from start to finish. And, that was not all... he also produced the fastest lap of the day, a 48.391 second lap.

Starting on pole position for the final, Kristoffersson was the only driver with new tyres (front tyres) and had a good launch off the line, only to be challenged by KYB Team JC's Robin Larsson who clipped the rear of Johan's Polo supercar, then was spun around the front of Mattias Ekstrom. While Kevin Hansen sweeped around the outside of Ekstrom to claimed P2 after the 2016 champion backed off due to the turn two melee. Facing the wrong way at turn two, Larsson was hit by Gronholm who was intern hit by Timmy Hansen.

Clear from all the bumping and grinding behind, Kristoffersson pulled a two-second gap to pursuing Kevin [Hansen] who tried to make an impact, but with an early joker lap strategy. The Team Hansen driver would fall behind Mattias Ekstrom, and would ultimately finish behind his older brother Timmy Hansen.

The untouchable Kristoffersson crossed line 3.468 seconds ahead of Mattias Ekstrom and Timmy Hansen, to claim his third win of the 2020 World RX season and also extend his Championship lead to 21 points.

"This feels very good. We were really pushing hard in Q2 and Q3, I was not really able to pull off the best times, but instead we had some good tyres for the semi-final and final so I think we had a big jump on our competitors or terms of tyres, then we had two good starts, and everything is much easier when you have fresh tyres," Kristoffersson said. "Big thanks to the team, we made some changes between Q3 and the semi-final and it actually made the car better so that feels good to gamble and go in the right direction."

Ekstrom’s second-place finish in Riga-Lativia is his 25th podium finish of his career and he admits that in order to beat Johan Kristoffersson, he needs to be spot on with everything he does.

"The first corner of the final was a little bit too exciting, I don’t know exactly what happened to Robin, we’ll have to watch the television, but it was a bit messy and after I drove as fast as I could behind Kevin. After he jokered I had a clear track and ended up P2. For sure that was not our wish when we came here, we wanted to win but during qualifying we were not good enough so we couldn’t do good enough starts so we couldn’t be at the front in Q1 and Q2," Ekstrom said.

"When you’re on the back foot then you have to try and recover and I think P2 is a good recovery, but you need to be spot on to win these races especially when the other guys are in top shape as well."

The Team Hansen driver is rather pleased with a podium finish after a hard-fought day in Riga. "We had a tough day. We see glimpses of really good performance, some good launches and I’ve been fastest on lap time many times today, but you know when you’re not upfront then it’s not easy," he said. "We need to improve those launches so we can be at the front of the races from the beginning. I must say coming in third is really good and I’m super happy about that. The team has worked so hard and it is paying off, but at this level, it’s a slow process to gain speed, but I’m quite confident tomorrow will be even better."

Kevin Hansen brought his Peugeot 208 across the line in fourth-place after avoiding the turn two melee but was unable to make inroads on Kristoffersson or Ekstrom, while top qualifier Niclas Gronholm finished in fifth followed by Robin Larsson in sixth-place.

While Johan [Kristoffersson] has a 100% record of converting front row starts to victories on Saturday's, he is yet to win an event on Sunday [double-header], and thus could be called a Saturday man. However, if he is able to put it all together on a Sunday, he will climb onto the top step of the podium.

Despite winning this afternoon in Riga-Lativa, the Swede will already have a plan for the sixth round six the FIA World Rallycross Championship tomorrow at the Bikernieki track in Latvia. 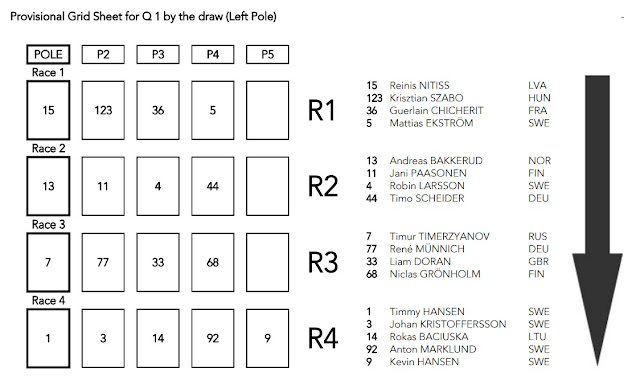