Niclas Grönholm has made a heavenly comeback in Hell after being sidelined due to appendicitis surgery six weeks ago.

The Hyundai driver won Q2 Race 4 and added the quickest time to his Q1 victory, to take the overnight top qualifiers position.

"It seems to be going my way today. I had a small clutch issue in the start of Q2, so really lucky not to get a jump start, that’s why I made a huge launch," said Grönholm. "We had good launches and strong pace in both cars (GRX Taneco) today."

The Finn did not know what to expect heading into Norway.

"It was quite difficult to expect anything, as I said earlier I had a five lap shakedown in Finland before coming here and it felt okay," he said. "So, I knew that coming won't be catastrophe, but didn't expect to be on the top after day one. Its a pleasant surprise!"

"I’m trying to do my best in every qualification, like I said earlier in the semi-final and final anything can happen so we just need to keep our heads down, keep working and try to maintain this speed."

Grönholm's team-mate Timur Timerzyanov finished in second place in Q2 race 4 and is second in the overnight standings.

The Russian jokes that his team-mate was quite far ahead of him today. "Actually, his back (cars rear) was quite far from my front in both runs," he said. "In Q2, he was far ahead and I was the only one going for the joker lap from the start line. Actually it was a good tactic, but in fact it was really difficult to drive behind."

"I was blind in some corners and I just had to physically send the car somewhere and see where I am. That was the difficult point of my Q2 (race), but we know that rallycross is a difficult kind of sport."

"I think all three drivers sitting here, we didn't have huge fights today. We are avoiding it and just doing clean runs," he concludes.

For the second session in a row, Timo Scheider with a strategic master class used the joker lap to secure the race victory (Q1 & Q2 race wins). The German joins the GRX Tanceo drivers in the top three at the end of day one.

"I am mega happy for the ALL-INKL boys, because I guess we deserved a good start to a weekend early in the season, and a better result overall," said Scheider. "Atleast this is a good Saturday. We need two more clean runs to make it to the semis (tomorrow). A podium will mean a lot to me."

Home town hero Andreas Bakkerud was second fastest in Q1, but after touching the rear of Gronholm at the first corner in Q2, he ran wide and Kevin Abbring slipped through on the inside moving up to second in the race.

The championship leader had a frustrating day despite making the best start in Q1, the Swede was slowed after contact with Janis Baumanis at turn 1. The contact with Hansen sent the Latvian into a high-speed spin and into Guillaume De Ridder.

Timmy Hansen lost time in Q2 Race 4 when he got stuck behind Bakkerud who ran wide at Turn 1, but opted for an early joker lap strategy, and managed to jump Bakkerud and made an on-track pass on Kevin Abbring who made a mistake and ran wide. Hansen ends day one in 5th overall. 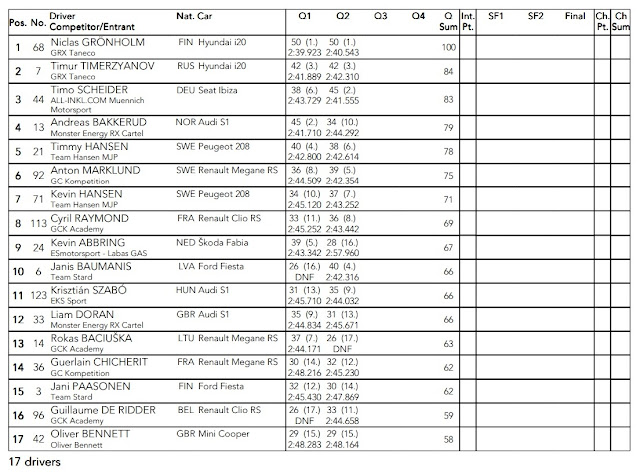