The Gumtree World RX of South Africa returns to Cape Town on 24-25 November 2018. 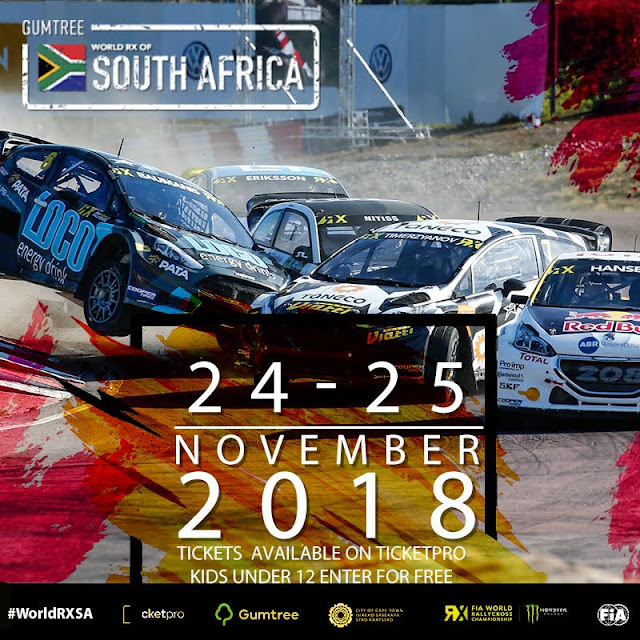 The FIA World Rallycross Championship returns to the shores of Cape Town, South Africa on 24-25 November 2018, at the Killarney International Raceway. In 2017, Gumtree World Rallycross of South Africa had a remarkable attendance for its debut year, and it was action packed because teams and drivers' held nothing back in the pursuit of victory.

Johan Kristoffersson, the 2017 Gumtree World RX of South Africa race winner, has already clinched the 2018 FIA World Rallycross championship, and in the process he has set a number of records for the most wins in a season and most top qualifier spots. Can he break another record in Cape Town?

The Swedish superstar drives for the PSRX Volkswagen Sweden team, who has also wrapped up the teams' championship at the Estering in Germany (in October).

Second place in the championship is still be up for grabs, with Mattias Ekstrὄm, Andreas Bakkerud (teammates) and Petter Solberg separated by only even points. Who will come out on top in Cape Town? It is set to be an incredible duel between these three drivers!

The 2018 World Rallycross Championship has been close between PSRX Volkswagen  Sweden, EKS Audi Sport, Team Peugeot Total and the likes of privateers: GRX Taneco, GCK Kompetition and Olsberg MSE who have given the factory teams a good run for their money.


The 2018 Gumtree World Rallycross of South Africa is set to be a weekend not to forget, with all the teams and drivers heading to Cape Town with one goal; to win!


RELIVE the 2017 Gumtree World Rallycross of South Africa in the VIDEO below:

There really isn’t anything more to say other than: book the date, round up the entire family, prepare to be exhilarated and, if you don’t already have them, go get your tickets online now at: ticketpros.co.za.

For more information go to www.fiaworldrallycross.com