1978
Mario Andretti won the German Grand Prix but the star of the show was Jody Scheckter, who battled his way back to second after dropping to the back of the field at the end of the opening lap. 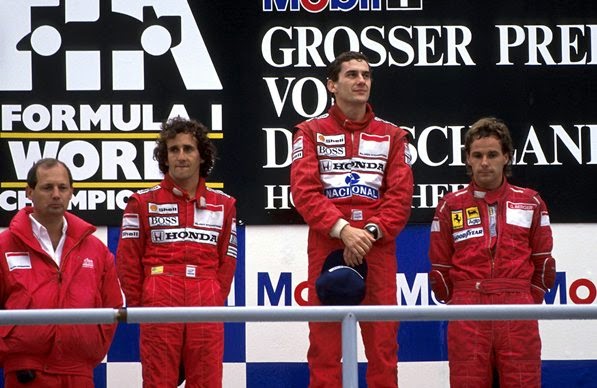 Ayrton Senna led home team-mate Alain Prost for a 1-2 at the German Grand Prix with Nigel Mansell finishing third in his Ferrari. The finishing positions mirrored those of qualifying.

1995
The first of Schumacher's German Grand Prix victories came over a decade earlier when he finished the race behind a tow track after stalling his Benetton whilst waving to the crowd in celebration. In winning, Schumacher became the first German to win his home race since the 1930s. Pole-sitter Damon Hill blew his chances of spoiling the party by spinning off on the second lap.


2000
A disgruntled Mercedes employee endangered his own life and that of the drivers at the German Grand Prix when he cut through the track fence and ran onto the track carrying a sheet with a message about the German car manufacturer. He managed to run across the track before marshals apprehended him. The man's intervention turned the race upside down. Until that point, Mika Hakkinen looked likely to lead home a McLaren 1-2 but the deployment of the safety car shuffled the grid, allowing Rubens Barrichello to take his first Formula one victory from 18th on the grid. It was the first win for a Brazilian driver since Ayrton Senna's last win in Australia 1993.

2006
Michael Schumacher secured his fourth German Grand Prix victory with a dominant drive in front of his home fans. Felipe Massa rounded off an easy day at the office for Ferrari as the main excitement of the race was provided by Kimi Raikkonen and Jenson Button in the scrap for third, Raikkonen catching and passing Button's Honda in the closing laps.