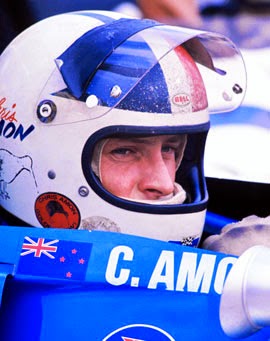 Often considered to be the greatest driver never to win a world-championship grand prix, Chris Amon was born in Bulls, New Zealand. At the age of 19 he made his F1 debut with Reg Parnell's racing team and scored his first points before the age of 21. After Parnell's death he competed in the odd race for Brabham before being signed up to drive for Ferrari in 1967. He immediately proved his class and took four podiums but his sought-after win eluded him. In 1970 he joined March where he did record a Formula One win but in the non-championship International Trophy at Silverstone. He won once more on his debut at Matra in 1971, but again it did not count towards the world championship and the rest of the season proved to be a struggle. He should have won the 1972 French Grand Prix but was deprived of almost-certain victory by a puncture. From that point onwards his career fizzled out and his attempt to run his own team in 1974 also proved fruitless. He now lives and works on his family farm and has also developed suspension for car giant Toyota since retiring from racing. 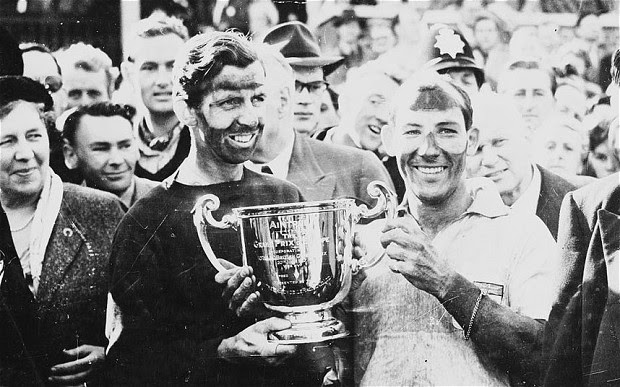 Sir Stirling Moss and Tony Brooks shared victory at the British Grand Prix at Aintree. The event marked the first victory for a British car in Formula One as the Vanwall led the Ferraris of Luigi Musso and Mike Hawthorn across the line. Moss, whose engine had failed, took over team-mate Brooks' car midway through the race, as his fellow Briton was still getting over the injuries from a massive accident at Le Mans that year. Moss rejoined in ninth place but immediately fought his way back into contention. "I came out quite a long way down but that suited me fine," he said. "You see the trouble is that when you are leading and the car fails, you get labelled as a car breaker. But when you're at the back coming through the field they don't care if you break it. So at least I could have a go." He worked his way back up to fourth and then took the lead when Jean Behra's clutch exploded and punctured the tyres of second place Mike Hawthorn. Moss passed team-mate Stewart Lewis-Evans and went on to take a comfortable victory. Over half a century later he told ESPNF1 it was his favourite British Grand Prix he ever took part in: "It was not a great circuit or anything else, but it was the first time a British car won a world championship race. And sharing it with Tony Brooks, who was such a fantastic driver anyway, certainly didn't take anything away from it."


1963
Jim Clark took his second of five eventual British Grand Prix victories in his career. After a shaky start from pole position he had a fairly straightforward race, regaining the four positions he lost on the first lap and going on to take the win by 25 seconds from John Surtees' Ferrari. BRM driver Graham Hill finished third to make it an all British podium at Silverstone.

1985
Keke Rosberg set one of the most incredible qualifying laps of all time at Silverstone, taking pole and lapping at an average speed in excess of 160mph. At the time it was a record and was the last qualifying lap set on one of the fastest layouts of the historic track. His best time was 0.658 up on Williams team-mate Nelson Piquet. The current fastest lap qualifying record is held by Juan Pablo Montoya, who recorded a lap at over 162 mph at Monza in 2004. 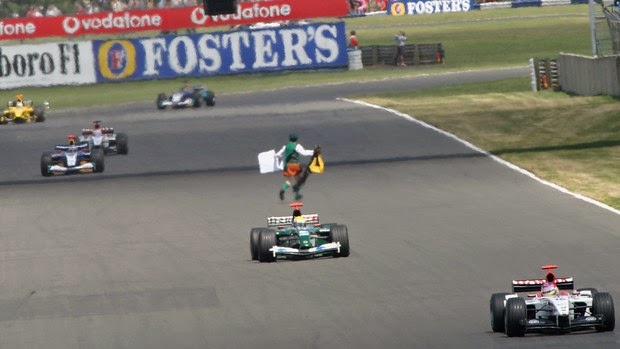 One of the most bizarre races of all time took place at Silverstone when a priest, baring a slightly confused religious message, burst on to the Hanger straight and forced drivers to swerve out of his way. Father Cornelius Horan, a defrocked Irish Roman Catholic clergyman, decided to break onto the track in order to spread his message that the world was coming to an end. Needless to say it didn't, but he did nearly stop the race and a safety car had to be deployed so he could be arrested, inadvertently shaking up the order and providing a thrilling race from that point onwards. Rubens Barrichello, who had started the race on pole, dropped a couple of places but got off lightly compared to his Ferrari team-mate Michael Schumacher, Juan Pablo Montoya and Fernando Alonso, who all ended up outside the top ten. Barrichello then mounted a fight back, pulling a brilliant overtaking move around the outside of Kimi Raikkonen at Bridge, to go to take one of the greatest victories of his career. Montoya finished second after his own spirited drive through the field and Raikkonen finished third. Horan was later charged with aggravated trespass and pleaded guilty saying an open gate onto the track had been a sign from God. He was jailed for two months but went on to enjoy more fame several years later on the TV show Britain's Got Talent.


2004
Sebastien Buemi became one of the youngest drivers ever to test an F1 car at just 15-years-old. He was let loose in a 1999 Arrows as a part of a tie-up with his sponsor TAG Huer. "The sensations are extraordinary," said Buemi. "More than ever after this experience I am determined to conquer the Formula BMW Championship in order to gradually climb the rungs that I hope will one day lead to Formula One." He eventually achieved his dream in 2009 when he was signed up as a Toro Rosso race driver.


2008
Lewis Hamilton recovered from a botched strategy to beat world championship-rival Felipe Massa to victory in one of his stand-out performances of his first title-winning season. Hamilton had the race under control until a huge accident involving Timo Glock's Toyota brought out the safety car. Most drivers followed convention and pitted, but Hamilton stayed out on track and lost position when he had to make his stop under racing conditions. However, he then recovered from fifth place with a brilliant display of overtaking around the Hockenheim circuit.