Safety in Formula 1: Clothing (Part One) 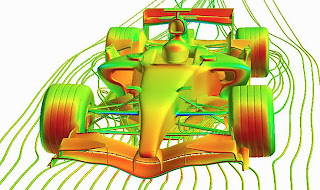 From the end of time safety has always been a factor in Formula 1, and since the death of Ayrton Senna in 1994, there has been no other fatalities due to the introduction of a variety of safety measures and precautions such as:  Helmets, HANS, Clothing, Cockpit safety and crash testing. I’ve decided to draw up a series of Articles, where these Safety Measures can be discussed in detail.

Clothing in the world of Formula 1 is often disregarded when considering the enormous collection of other high tech safety equipment. Hence me starting my series with a segment about “Clothing”. The Formula 1 safety clothing also has a primary purpose; to protect the driver in case of serious fire. Since 1975 the Fédération Internationale de l'Automobile (FIA) has required that driver clothing be flame retardant so as to offer protection in the event of a fire. Now-a-days the key material used for Formula 1 and other racing suits is Nomex - a fire-resistant, lightweight artificial fibre. It is subjected to an open flame with a temperature of 300 to 400 degrees Celsius that acts on the material from a distance of three centimetres - only if it fails to ignite within 10 seconds can it be used in a driver’s overalls.

Fires have become less of a problem for Formula 1 in recent years but this has not led to a disregarding of safety clothing. The clothing that is used in Formula 1 today is made from fire-proof materials that are so efficient they can protect a driver as his car burns around him. The items of clothing include overalls, gloves, boots and balaclavas in an attempt to shield every part of the driver's body in the event of a fire. It’s not just the driver that has to wear the levels of safety clothing. Pit crews must wear equal amounts of safety gear as the pit lane is the most dangerous place on a Formula 1 racing track.

According to Formula 1.com – “The zip on the suit must also be able to withstand the same temperatures and must not melt or transfer heat close to the driver's skin. Even the thread used to sew it together must be fire resistant, as must any patches, although the majority of sponsor logos are now printed on - a change that has helped cut the weight of overalls by over half a kilo in the past few years. But not only are modern race suits light, they’re also breathable to in order to allow the several kilos of sweat produced by the driver during a race to escape.” The racing suits should also have two large ‘handles’ on the driver’s shoulders. These straps should be capable of supporting the combined weight of the driver and his seat, which in the event of an accident can be removed from the car by marshals ‘as one’, in order to minimise the risk of complicating injuries.

Underneath his race suit the driver wears a further layer of flameproof underwear, and under his helmet a fireproof balaclava. Gloves may appear as an insignificant piece to Formula 1 safety clothing but are disputably the most important of all. According to Formula 1.com – “They must be made as thin as possible to ensure the driver can maintain his connection to the car whilst also remaining fire-proof enough to protect. The same can be said for Formula 1 boots as the soles of these are made extremely thin so the driver has the closest contact with the pedals of the car.”

There is no doubt that the safety clothing has made Formula 1 far safer, looking back to the fifties when drivers wore cloth overalls, goggles and leather driving caps the advance in technology is almost unbelievable. In one of the most dangerous sports in the world it is reassuring to know that so many designers are producing items of clothing with the driver's safety as their primary concern.
Posted by Junaid Samodien at 18:22