The first season of the electric era will see the championship travel to seven countries with 11 rounds (four double-headers) - a return to normality after two seasons affected by the global pandemic.

The all-electric World Championship will be officially launched at the iconic Höljes track over the course of the ‘Magic Weekend' at the beginning of July, alongside racing action from Euro RX1, Euro RX3, and the FIA RX2e Championship.

Having hosted the season finale in 2021, the famous Nürburgring (Germany) will host round two of the championship at the end of July, before the trek to Hell (Norway) which makes a welcome return in mid-August.

After three single rounds, now the pressure and action heats up, four double-headers are on the cards. First up, is Rīga’s Biķernieku trase (Latvia) followed by Montalegre (Portugal) in September. Spa-Francorchamps (Belgium) will host the penultimate round of the season.

Cape Town (Killarney) was originally set to host the season finale, but the latest revised calendar has mentioned an undisclosed venue potentially in November. Further information on the season finale is expected to be released in the coming weeks. 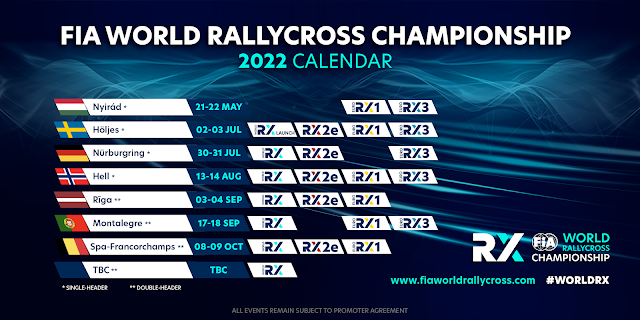 Posted by Junaid Samodien at 12:57