The first season of the electric era will see the champion travel to nine countries with 12 rounds across seven events (five double-headers) - a return to normality after two seasons affected by the global pandemic.

The action is set to get underway at the iconic Höljes circuit in early July, before moving to Germany's Nürburgring - the venue that hosted a thrilling season finale last month.

After those two single-headers, the remaining five events will all take the form of double-headers, beginning with a welcome return to Hell (Norway) in mid-August after a two-year absence due to the global pandemic.

Rīga’s historic Biķernieki trase is next up in September, followed by the Montalegre circuit a fortnight later and legendary Spa-Francorchamps in early October.

After a two-year absence, Cape Town is expected to host the season finale (double-header) at the Killarney International Raceway in November, subject to prevailing COVID restrictions.

"We are delighted to present the provisional 2022 calendar for the FIA World Rallycross Championship. A lot of hard work has gone into putting together what we believe is a schedule that blends the very best of this sport, from much-loved traditional rallycross tracks to iconic, world-renowned motorsport venues – and we are sure everybody will welcome the prospect of returning to South Africa for the season finale," Arne Dirks, Executive Director, Rallycross Promoter GmbH, said. 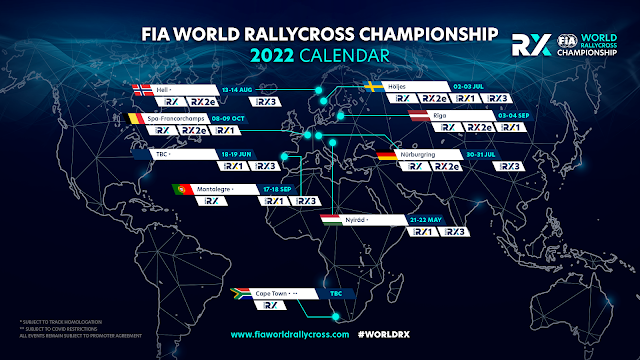 Posted by Junaid Samodien at 12:49