PREVIEW - Can anyone stop Kristoffersson in Barcelona double-header?

The heat is on! SIX DOWN... with four to go. The fourth and final double-header of the 2020 FIA World Rallycross Championship will take place at Circuit de Catalunya-Barcelona this weekend.
Barcelona will play host the final double-header of the season, and with this, we'll see minor naming changes. Instead of a standard name across the full weekend. The event organizers have opted for two names for each round.

This year's round at Circuit de Catalunya will be held behind closed doors due to the COVID-19 pandemic. And, all competing teams and event organizers and officials will be operating on reduced staffing levels to comply with the FIA safety regulations with 295 accredited personnel, a reduction of 55 personnel compared to Latvia. All personnel are required to provide a negative PCR test before they are allowed to enter the circuit.

The unprecedented 2020 FIA World Rallycross Championship will continue this weekend after a 26-day break. Three different drivers have taken event wins this season, while Johan Kristoffersson leads the way having won rounds one, three, and five.

The double World Champion has established a 17 point lead at the head of the championship, with closest rival Mattias Ekström aiming to stop his Swedish compatriot in his tracks. Ekström returned to the championship this season in place of Janis Baumanis with KYB Team JC and has won rounds two and six.

The 2016 World RX champion has a clear plan of what he needs to do this weekend. "If I want to be world champion I think it’s pretty fair and square, I need to beat Johan at least twice and I have two chances this weekend on Saturday and Sunday to bring the lead down to single numbers. That means from 17 down to nine, beating him by eight points," he said. "That is the hope and the target."

Ide was sidelined for much of last season following an accident at home that left him in an induced coma for several months. The Belgian will return to World RX this weekend at the wheel of a third JC Raceteknik Audi S1 Quattro.

GRX Taneco's Niclas Grönholm was one of the favorites heading into the season but has not had the start to the season that he had expected despite picking up a win at round four of the championship in Kouvola. And, while it hasn't been the easiest of seasons for the Finn, he currently holds third place in the championship. His teammate at GRX Taneco, Timur Timerzyanov has had the pace but has ultimately fallen foul to ontrack incidents and mechanical issues, he is currently in ninth-place in the championship standings.

The Hansen brothers have had a good record at Circuit de Catalunya-Barcelona having claimed a one-two finish last season, and will aim to replicate that result this weekend.

Whilst the updated Peugeot 208 WRX hasn't been as strong as the team expected. Both Kevin and Timmy spent their downtime testing their supercars and found some much-needed improvements.

"I've conducted many rallycross tests over the years and the results we got out of our test last week were some of the best we've ever had. I'm very excited to be coming to Barcelona with this fresh approach we've got and the multiple updates we've brought with us," Timmy Hansen said

Monster Energy GCK RX Cartel's Andreas Bakkerud returns after a 120km/h crash in Latvia. He confirmed that his Renault Megane R.S.RX has been rebuilt and is ready for this weekend's action, while Liam Doran is hoping that his run of bad luck has ended.

Timo Scheider has shown his potential at the wheel of the AllInkl-Muennich Motorsport Seat Ibiza, but last time out, it was a weekend to forget for the double DTM champion who was disqualified for the incident with Andreas Bakkerud.

This weekend Scheider will be partnered by Mandie August who replaces Rene Muennich and becomes only the second female driver to start a World RX event.

GCK Bilstein's Anton Marklund will hope for better luck this weekend after suffering with a number of technical issues this season.

After a tough start to the season, UNKORRUPTED announced their withdrawal from the Spanish round of the championship citing: "We have found significant issues that can not be addressed in time to be race-ready."

The French squad will hope to solve their issues ahead of the final two rounds in Belgium and Germany later this year.

Joining the Permanent Competitors in Barcelona is Tamas Karai who will return in his Audi Supercar having also competed in the World RX of Finland double-header.

Xite Energy's Oliver Bennett is back! The Brit returns to the championship after missing the opening six rounds. He will be driving his redeveloped Mini SX1. While Frenchman Patrick Guillerme will conclude the 16-strong driver line-up in his Hyundai i20.

The GRID for Q1 - ROUND SEVEN of the FIA World Rallycross Championship. 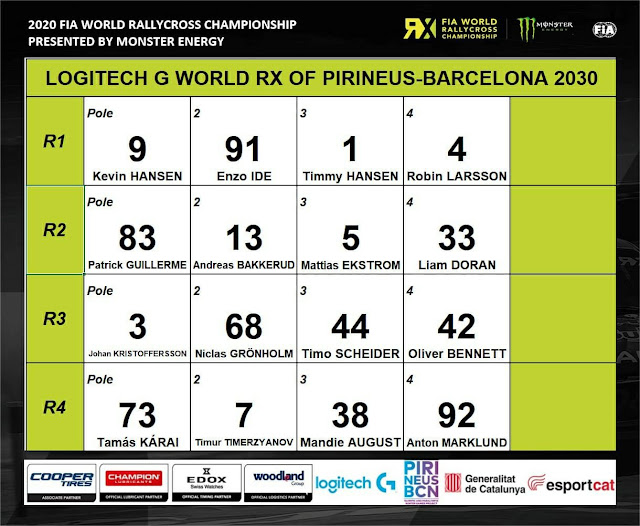 Situated within turns 10 to 15 of the 4.6km Formula 1 circuit, the World RX track at Barcelona is 1,135km long and consists of 60% tarmac and 40% gravel. It uses parts of the F1 track in both clockwise and anti-clockwise directions. A significant change as a safety improvement since last year, the inside of rallycross turn three – the long right-hander in the first gravel section – is now lined by a steel guard rail which replaces the tyre wall previously used.

What to look out for:

Turn One: Like the previous round in Latvia, Barcelona's first turn on the rallycross circuit has a funnel-like effect. It's only used on the first lap before joining the main track but as a high-radius corner a few hundred metres after the start. Expect plenty of nudging between drivers trying to get the holeshot.

Joker exit: The fastest part of the circuit is the back straight, which runs between turns 12 and 13 of the F1 track in the reverse direction. While those on the regular lap have track position and the inside line, cars exiting the joker have a huge momentum advantage with higher corner exit speed. Look out for bold around-the-outside passes here!

The livestreams for the events will be carried on the official World RX Facebook page and YouTube channel:

Posted by Junaid Samodien at 20:14