This is the final installment of the Safety in Formula One series, I really hope that you have enjoyed it!. However, this article will focus on the ‘Crash Tests’ of Formula One cars. Similar to our road cars, Formula One cars must undergo crash tests before being passed fit for the awaiting season. According to F1.com, “Introduced in 1985 and supervised by the FIA, these stringent evaluations are usually carried out at the Cranfield Impact Centre in Bedfordshire, England and comprise dynamic (moving) crash tests, static load tests and rollover tests.”

The dynamic impact tests are performed on the front, sides, and rear of the chassis, including the steering column. The most important element of the crash test is the driver’s survival cell which is required to remain undamaged throughout the tests. The weight of the test chassis, including a crash dummy is required to be 780 kg. The front impact test is done at a speed of 54 km/h, the lateral (side) at 36 km/h and the rear at 39.6 km/h.

The crash test speeds may seem low, but are chosen to allow the most accurate measurement of the car's ability to safely absorb the unwanted momentum of an accident. According to F1.com, “The limits for maximum deceleration, energy absorption and deformation are precisely defined. For example, during the frontal test the deceleration measured on the chest of the dummy may not exceed 60G (60 times body weight) within three milliseconds of the impact...”

The steering column test is designed to ensure that it will collapse safely in the event of the driver’s head impacting the steering wheel. The column would be fixed to the ground and an 8kg object is projected into the center of the wheel at a speed of 25 km/h. All substantial deformation must be within the steering column; deceleration must not exceed 80G (80 times gravity) for more than three milliseconds; and the wheel’s quick release mechanism must function normally after the test.

In addition to the five dynamic tests, a further 13 static load tests are carried out on the chassis’ front, side and rear structures to ensure they can withstand the levels of pressure required by the regulations. These tests include applying pressure to the floor below the fuel tank, to the side of the nose mount, and to the chassis’ sides at leg and seat levels. According to F1Dictionary, “The surfaces in question may only deflect or deform within specified limits and there must be no damage to the impact structure, the survival cell or the gearbox.”

Did you know …that a Formula One car’s cockpit walls, which were heightened by five centimetres in 2008, must withstand impacts equivalent to 250 tonnes?

The car’s rollover structure would be tested in three directions: laterally (sideways) with five tonnes, longitudinally with six tonnes and vertically with nine tonnes - and the level of deformation under load may not exceed 50 mm.

Although the principal aim of these crash tests are safety. After any significant modification on the crash structure (survival cell) during the season, static and dynamic tests must be repeated on the modified part(s). But, each new produced survival cell must be subjected to only static crash tests. The survival cell is required to pass every static load test before being subjected to any impact test.

A new innovative side impact system that works effectively regardless of the angle of impact has been implemented for the 2014 season. The teams have agreed to implement this system for 2014 season at the F1 Technical Working Group meeting which was held on 17 May 2013. The FIA and F1 Teams collaborated for over a year to develop a side impact system that works effectively in every situation.

According to the F1Dictionary, “The old side impact system deploys crushable tube structures attached to the side of the chassis. Although extremely effective during normal impacts, they can break off during oblique impacts due to the extremely high lateral forces that are generated during the first few milliseconds of an impact. The testing concluded that the carbon tubes had far more potential to provide an efficient, lightweight and robust solution, able to manage impact loads effectively in both lateral and for-aft directions.” The winning innovative solution was based on the initial design by Marussia, before undergoing extremely detailed optimization by Red Bull Racing. The innovative tube solution has a common specification but how teams place them into their cars is entirely their business. Once these tubes are built onto the cars, the static tests will be undertaken on the monocoque which would then determine the strength of the mounts and make sure that they are sufficient to support the tube. Thereafter, it is the responsibility of the teams as to how they incorporate it (tubes) and how they design their car around it.

One can now establish that the new breed of Formula One car is much safer than before. While compiling this series, I have learnt quite a bit about Safety in Formula One, which we normally take for granted while watching the sport from our sofas. We also take it for granted that the sport has become much safer than before, but we don’t necessarily take note of all the hard work that has gone into making the sport safer for all concerned. That concludes the Safety in Formula One series!!! I truly hope that you have enjoyed this series!

Posted by Junaid Samodien at 14:12 No comments:

'What Next for Alonso'? 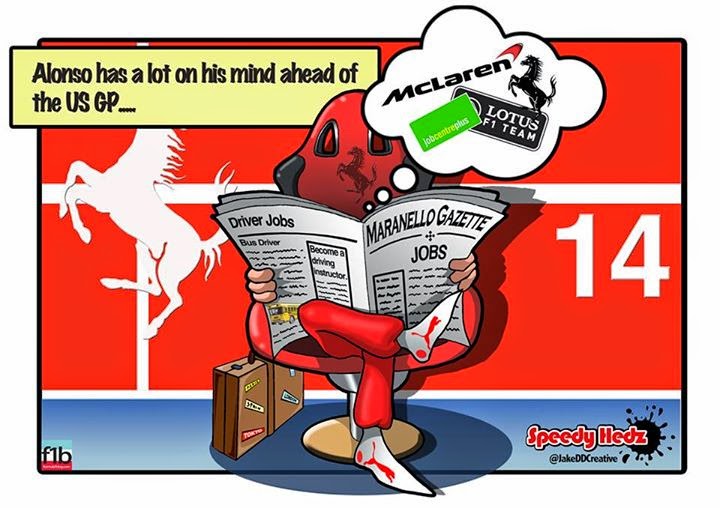 Posted by Junaid Samodien at 18:14 No comments:

Part 4 - The United States Grand Prix - DID YOU KNOW FACTS 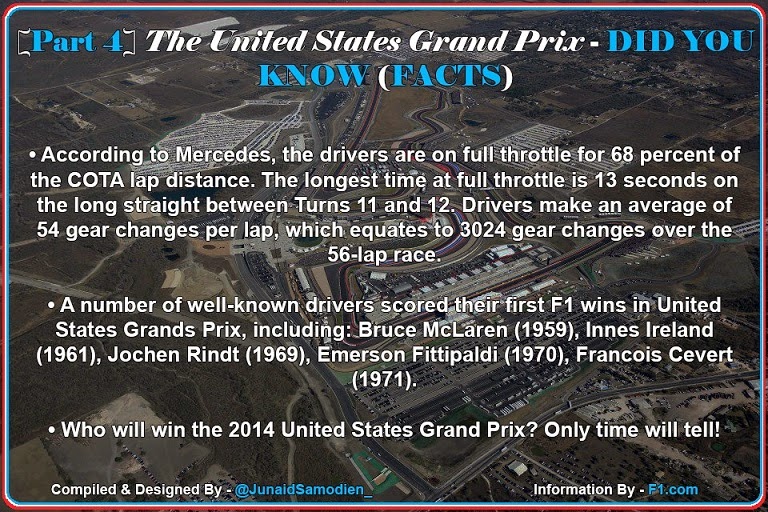 Posted by Junaid Samodien at 17:36 No comments:

Part 3 - The United States Grand Prix - DID YOU KNOW FACTS 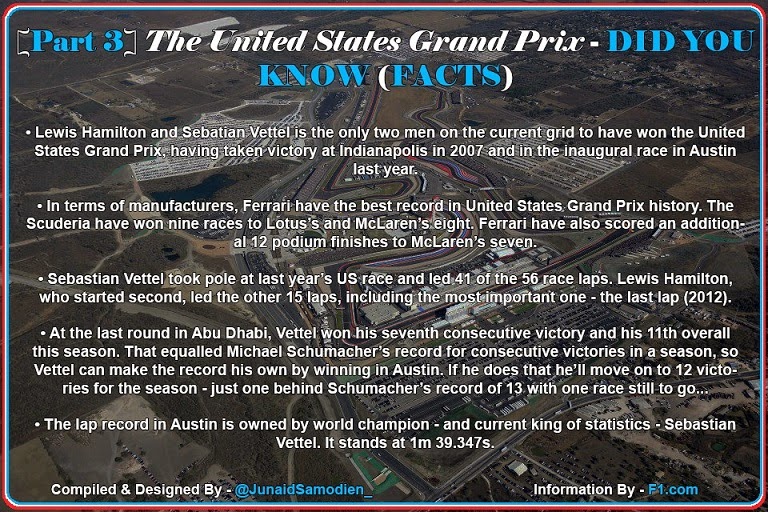 Posted by Junaid Samodien at 17:36 No comments:

Part 2 - The United States Grand Prix - DID YOU KNOW FACTS 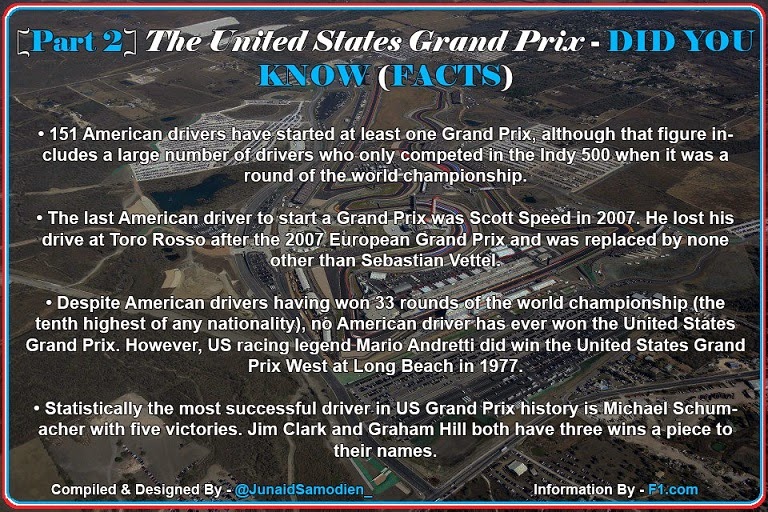 Posted by Junaid Samodien at 17:35 No comments:

Part 1 - The United States Grand Prix - DID YOU KNOW FACTS 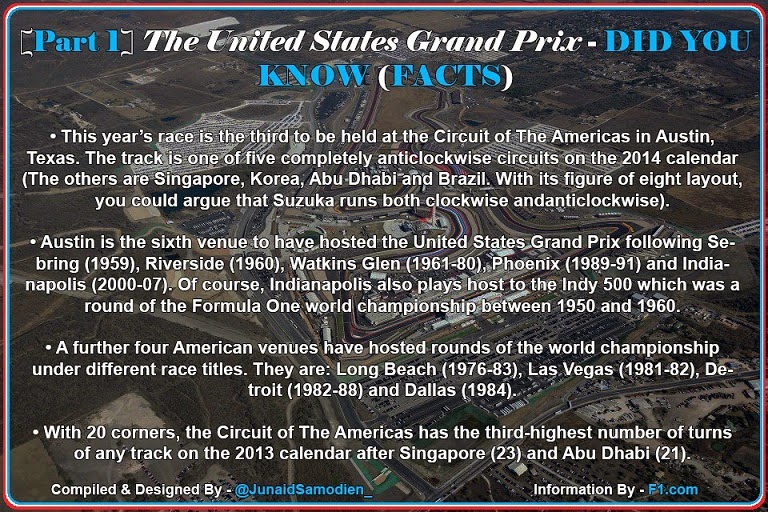 Posted by Junaid Samodien at 17:33 No comments: 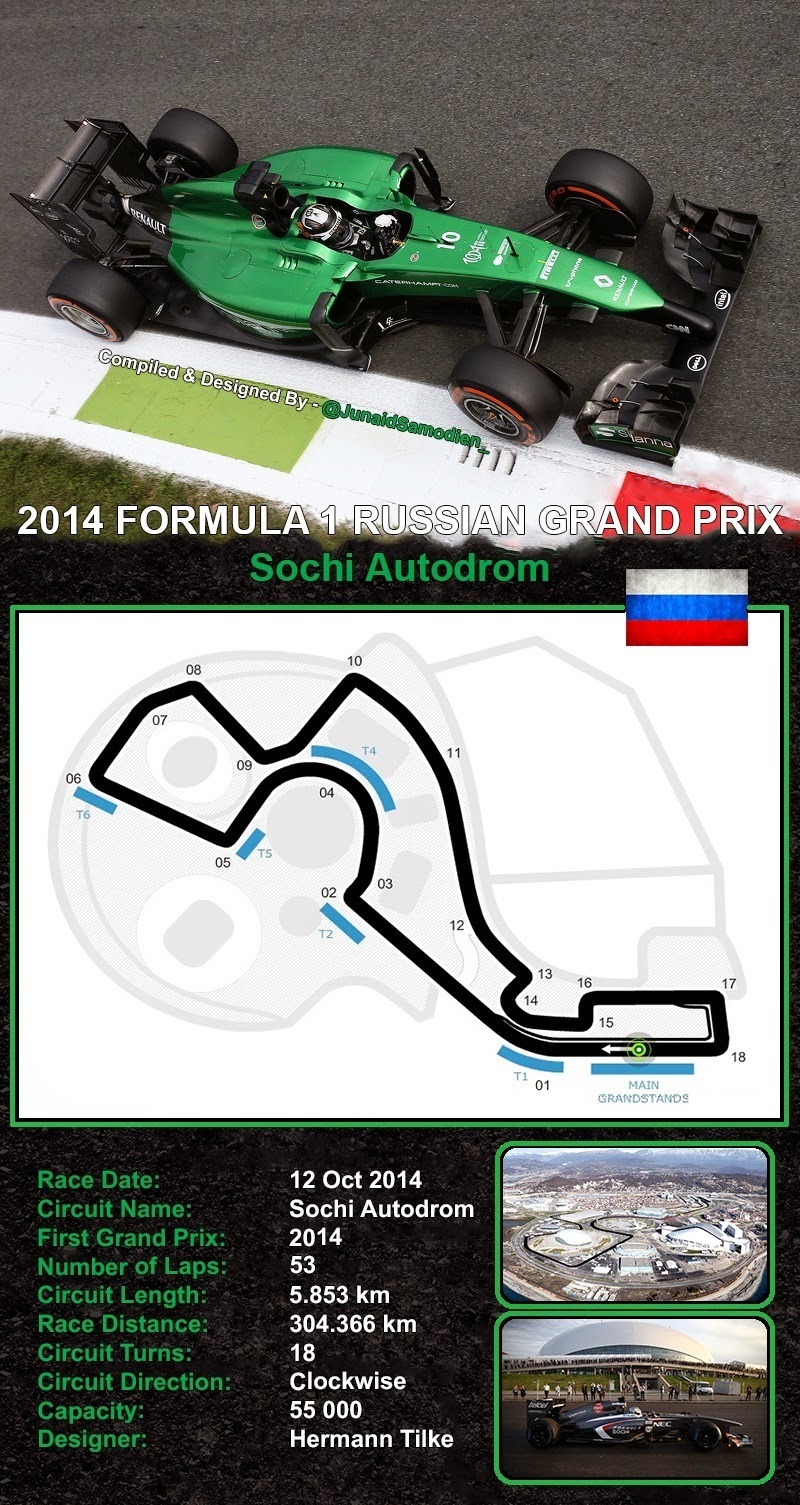 Posted by Junaid Samodien at 18:13 No comments: